Princess Anne, 69, will be the FIRST royal to return to work in-person: Princess Royal will visit Covid-19 workers at the Duke of Gloucester Barracks next week despite being in the ‘at risk’ age group

By Harriet Johnston For Mailonline

Princess Anne will be the first royal to return to working in-person with an engagement scheduled for next week to visit the Duke of Gloucester Barracks.

A tweet shared by Gerts Royals outlined how the Princess Royal, 69, is set to meet with COVID-19 staff at the Barracks in South Cerney, Gloucesterhire on 16 June.

If the engagement goes ahead, it will mark the first time that a member of the British royal family has had an in-person appearance since the start of the pandemic in March.

And the news may come as a surprise to some because the 69-year-old would be more ‘at risk’ to the coronavirus than younger members of the royal family such as the Cambridges or the Wessexes. 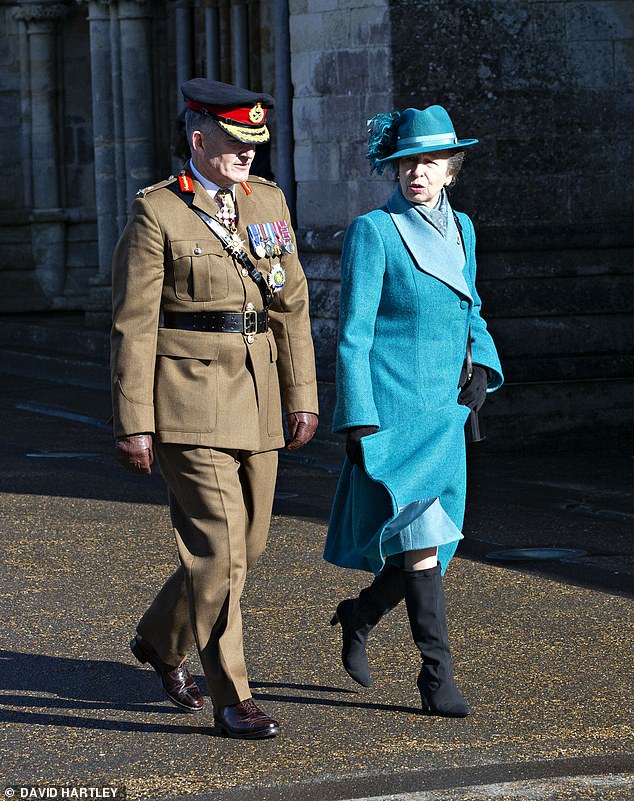 Princess Anne, 69, could become the first royal to return to work in person, with an engagement scheduled in her diary next week to visit the Duke of Gloucester Barracks 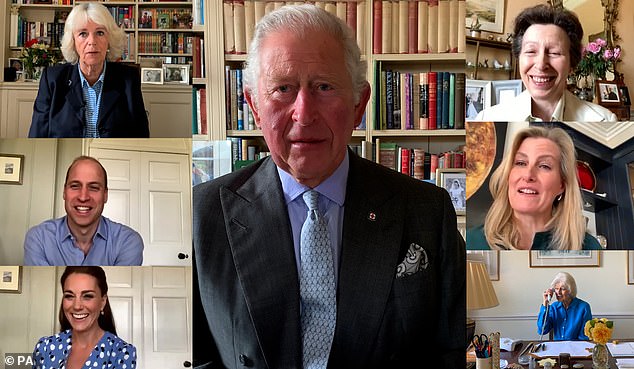 If the engagement goes ahead, it will mark the first time that a member of the British royal family has had an in-person appearance since the start of the pandemic in March (pictured, the royal family making video messages to mark International Nurse’s Day)

As well as an engagement next week at the royal barracks in her role as Colonel-in-chief, the Princess Royal also has other appearances in the diary.

The 69-year-old is also set to visit Scarborough and Ryedale Carers, of which she is president to mark the organisation’s 25th anniversary on 30 June.

And she will go on to visit Dovecote Park in Pontefract as part of her role as president of the City and Guilds of London Institute.

There aren’t currently any engagements in the diary for other senior members of the royal family. 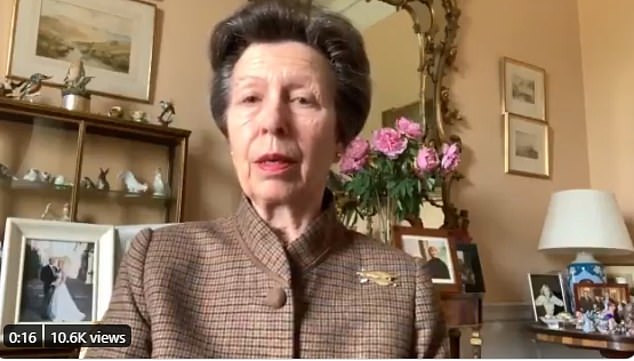 The Princess Royal, who will celebrate her 70th birthday in August, was one of the last royals to have a public engagement, attending the National Convention at Addington Equestrian Centre on 16 March.

The last members of the Firm to attend a visit in person were the Duke and Duchess of Cambridge, who met with NHS call centre staff days later on 20 March.

That month,  Health Secretary Matt Hancock said that people aged over 70 would be required to self-isolate for up to four months in order to protect them from the Covid-19 illness.

This impacted the senior royals, the monarch, who is 93, heir to the throne Charles, 71, and the 72-year-old Camilla. 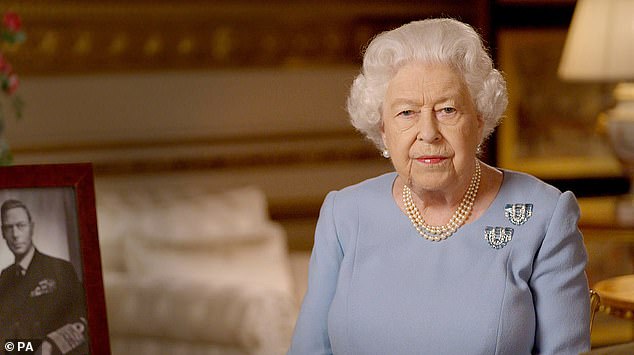 The news comes days after it emerged the Queen, 94, who has put all her public engagements on hold as she resides with her husband Prince Philip at Windsor Castle, may not be allowed to return to her public duties due to the risk of catching Covid-19 ‘for years’ to come (Pictured during her address to the nation and the Commonwealth on the 75th anniversary of VE Day) 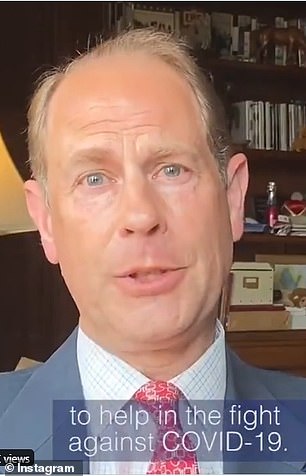 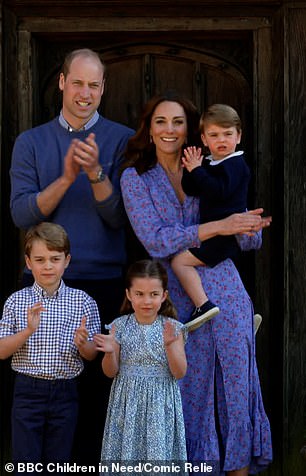 It had been reported that those younger members of The Firm may be the first to return to in-person engagements, including that of the Duke and Duchess of Cambridge (pictured right with their children during Clap for Carers) and the Earl (left) and Countess of Wessex

The younger households, including that of the Duke and Duchess of Cambridge and the Earl and Countess of Wessex, have been reportedly looking at how physical engagements can be done in the future but are yet to schedule anything officially in the diary,

How at risk are older people from coronavirus?

Since March 23, elderly Britons and those with chronic conditions have been told not to leave their homes or come into close contact with anyone.

Families have been urged to avoid grandparents in case they pass on the highly contagious virus, which is lethal for elderly and already-ill patients.

According to a PHE report, people over 80 in England who are hospitalised with covid-19 are 70 times more likely to die compared to people under 40.

Meanwhile, the probability drastically increases for those over the age of 60, who are 27 times more likely to die if hospitalised with Covid, and 50 times higher for those in their 70s.

In the ONS figures up to 24 April, 81.5 per cent of deaths in England and Wales with coronavirus on the death certificate were for people aged over 70.

The British royals have stayed in touch with fans through social media, with the Cambridges sharing a new photo of Prince William sheltering Prince George, six, and Princess Charlotte, five, under an umbrella to mark Volunteers’ Week in the UK on Sunday.

William and Kate have embraced the role of at-home teachers for their two eldest children during the lockdown, and with Gavin Williamson announcing the Government has scrapped its target of getting all primary school pupils back in the classroom before the summer holidays, it’s likely they’ll be continuing until next month.

Last month it was reported that the Queen may remain in self-isolation ‘for months’ and never return to regular frontline royal duties.

Her Majesty, 94, who has put all her public engagements on hold as she resides with her husband Prince Philip at Windsor Castle, may not be allowed to return to her public duties due to the risk of catching Covid-19 ‘for years’ to come.

Royal biographer Andrew Morton, 66, told The Sun that he feared the Queen, whose schedule is not expected to resume until the autumn at the earliest, may never be able to return to her regular duties and will most likely be seen on TV or video links rather than in public.

Meanwhile Prince Charles, 71, remains in isolation with the Duchess of Cornwall at his Aberdeenshire home of Birkhall on the Balmoral estate.

He contracted coronavirus in March but claims he was ‘lucky’ to have experienced ‘relatively mild symptoms’.

Princess Anne is oft regarded the ‘hardest working royal’ because of her high number of public appearances and engagements each year.

Last year, the Prince of Wales was the busiest member of the family with 521 engagements, just ahead of the ever-active Princess Royal on 506. 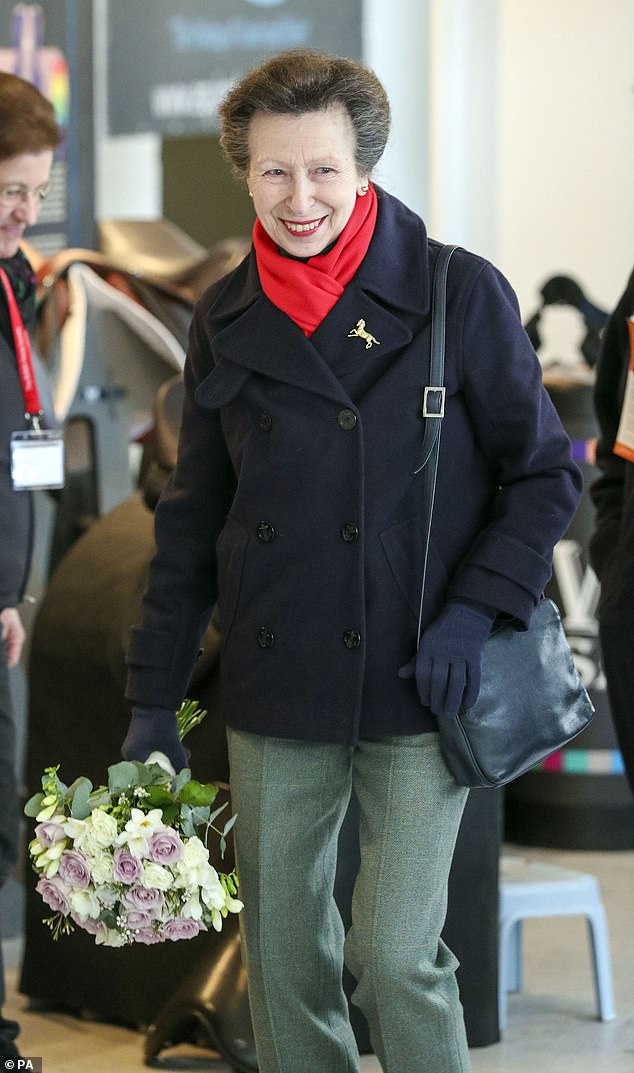 Analysis conducted by The Telegraph also showed that the Queen’s daughter worked 180 days of the year in 2018.

In March last year it was also revealed that she has clocked up 20,000 engagements in 50 years.

Her official debut took place 50 years ago, on March 1, 1969, St David’s Day, when she handed out leeks to the Welsh Guards at Pirbright Camp in Surrey.

Which European royals have returned to work?

Queen Letizia of Spain, 47, ventured out last week without a protective face mask to accompany her husband King Felipe VI to the Centre of High Performance (CAR) in the facilities of the Superior Sports Council (CSD) in Madrid.

It was the first time in three months that the royals were seen publicly without masks, and they stood at a safe distance from the centre’s staff. Spain outlined a four-stage plan on 4 May to start the easing of one of the strictest lockdowns in Europe.

Further measures were relaxed on Monday, with the Health Ministry reporting the lowest number of new coronavirus infections since early March. 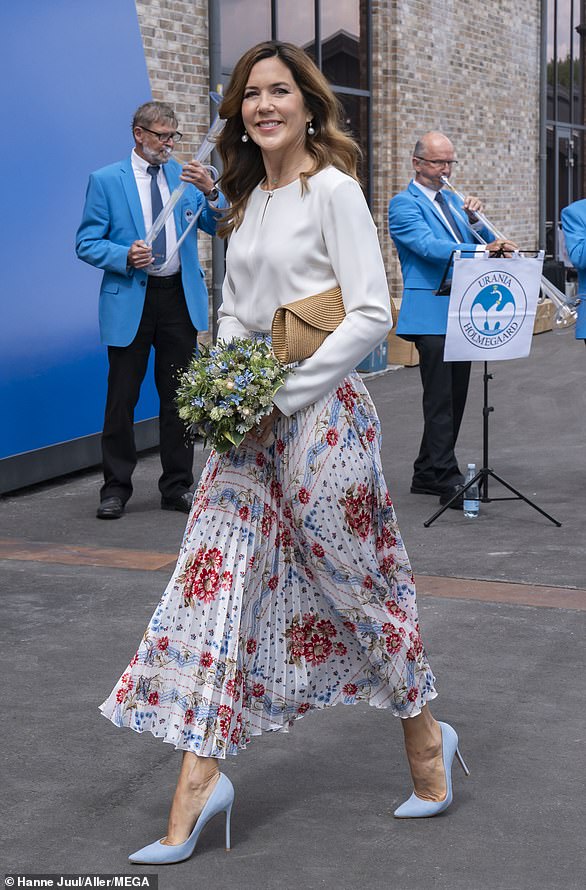 Queen Maxima of the Netherlands, 49, has also resumed her busy schedule of public engagements, visiting an Art Museum in The Hague last week, and enjoying at night at the National Theater with her husband King Willem-Alexander, 53 – its first performance since re-opening after 11-weeks of lockdown.

The Netherlands imposed a far less strict lockdown than its European neighbours.

Princess Mary of Denmark was also out and about this week; she attended the opening of the new Holmegaard Vaerk Museum. 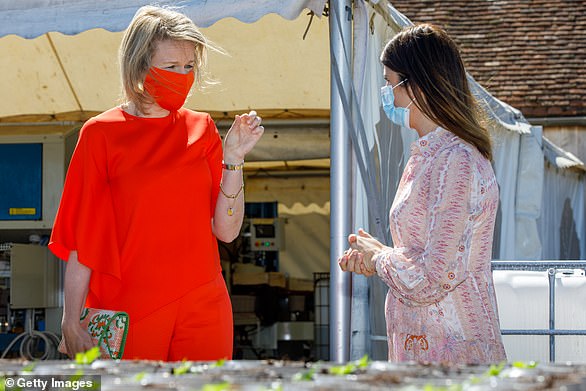 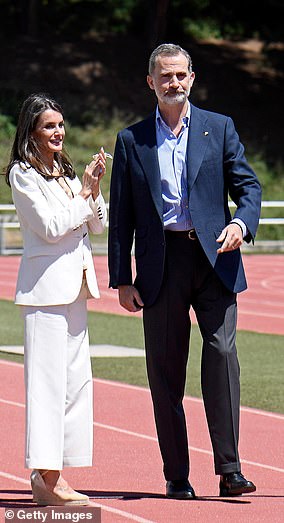 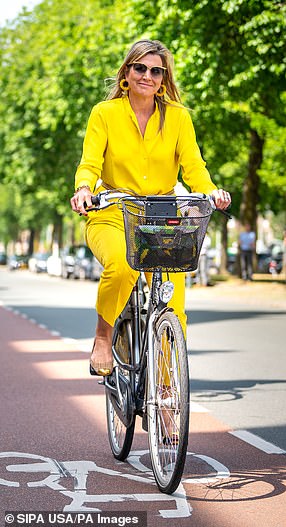 Queen Letizia of Spain, 47, ventured out yesterday without a protective face mask to accompany her husband King Felipe VI to the Centre of High Performance (CAR) in the facilities of the Superior Sports Council (CSD) in Madrid (left) and Queen Maxima of the Netherlands, 49, has also resumed her busy schedule of public engagements, visiting an Art Museum in The Hague last week (pictured right returning on a bicycle)

Denmark, one of the first European countries to announce a lockdown, started to ease its restrictions in mid-April, implementing a four-phase plan. On June 8 it was announced residents can attend social gatherings including up to 50 people under Phase 3.

Restrictions are slowly being lifted in Belgium; since May 10, people in the same household have been allowed visits from a group of up to four people, while schools and shops have reopened with social distancing measures.