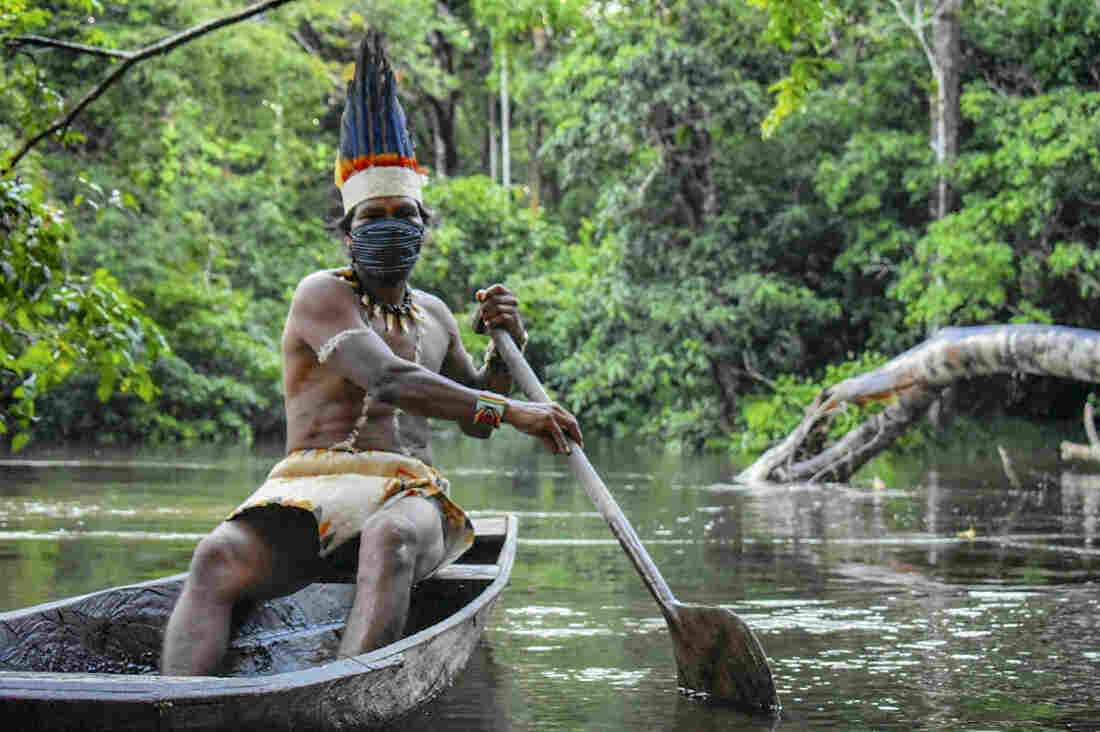 A Colombian Huitoto man sails on a raft along the Takana river in Leticia, Amazonas department, Colombia, on May 20, during the coronavirus pandemic. Tatiana de Nevó/AFP via Getty Images hide caption

With nearly 40,000 deaths, Brazil has registered the world’s third-highest COVID-19 death toll and the second-highest confirmed caseload. Its neighbors fear the disease is spilling across Brazil’s borders. Indeed, one Colombian frontier town has already turned into a coronavirus hot spot.

Located at the southern-most tip of Colombia, Leticia is an Amazon River port abutting Brazil and Peru. There are few flights and no roads connecting the town to the rest of Colombia. So, Leticia’s 50,000 people get the vast majority of their food and supplies from the neighboring South American countries.

Jesús Galdino, the governor of Colombia’s Amazonas department or state, which includes Leticia, says this economic reality made it impossible for Colombia to seal its border when the coronavirus began sweeping through Brazil.

In addition, many Colombians live in Tabatinga, a Brazilian town next to Leticia, and they frequently cross to the Colombian side to work, shop or visit relatives. In some neighborhoods, the street forms the dividing line between the two nations.

“It would have been futile to try to set up a blockade,” Galdino said in a telephone interview from Leticia. “And with COVID making such a huge impact in Brazil, the number of cases here has also been massive.” 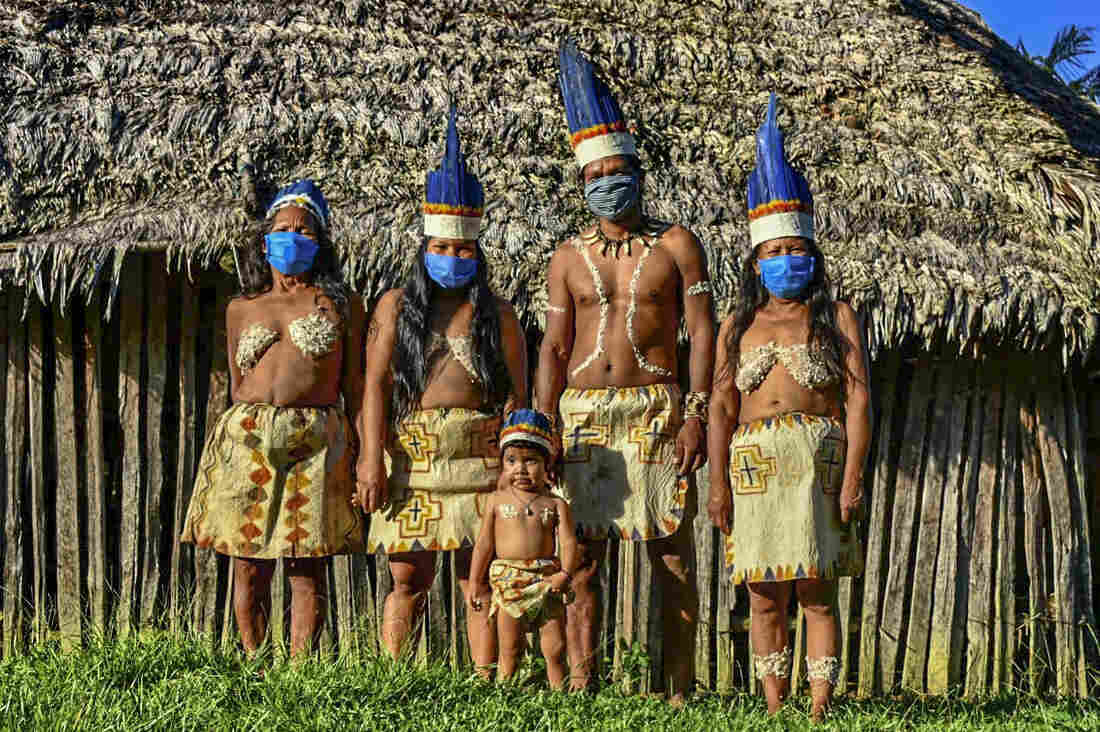 Now, nearly 2,000 people in and around Leticia are sick with COVID-19. About 70 have died. That might not sound like a colossal death toll at first. But because the surrounding state of Amazonas is sparsely populated, this amounts to the highest per-capita death rate in all of Colombia, according to figures from Colombia’s Health Ministry.

Among the first to fall ill in Leticia was Antonio Bolívar, a member of the Ocaina Indigenous tribe and a part-time actor. He became a local celebrity following his starring role in the 2015 movie Embrace of the Serpent, the first-ever Colombian film nominated for an Oscar.

In the movie, set in the early 20th century, Bolívar plays Karamakate, a shaman and the last survivor of an Amazonian tribe who frets that he is losing touch with his culture. He deals with rapacious rubber barons and religious fanatics as he guides a German scientist and, much later, an American botanist through the jungle to find a sacred healing plant. 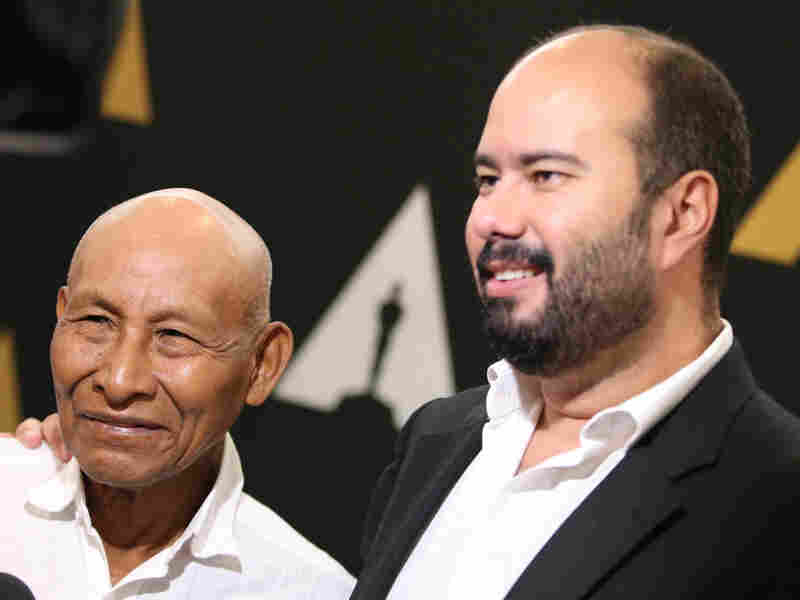 Antonio Bolívar and director Ciro Guerra at the Academy Awards at Samuel Goldwyn Theater on Feb. 27, 2016, in Beverly Hills, Calif. The film Embrace of the Serpent was nominated in the foreign language category. Omar Vega/Invision/AP hide caption

In real life, Bolívar was the one who needed to be cured. In April, he came down with a high fever and had had trouble breathing, according to his son, Cristian Bolívar.

“We were treating him with natural medicine,” the younger Bolívar says. “But things took a turn for the worse so I called an ambulance to take him to the hospital.”

Indigenous people, who make up the bulk of Amazonas’ population, are especially vulnerable to COVID-19. Some live on reservations near Leticia and lack Internet access to get information about the disease. What’s more, their communal traditions can increase contagion, says Germán Palacio, a university law professor in Leticia.

“It’s like a cultural thing. You share with others,” Palacio says. “Food. Drinking. Everybody is drinking from the same source, or from the same glass. You put yuca in the middle of your table and everyone shares it.”

For those who fall ill there are few options in Leticia. The town should be home to a brand-new public hospital. But corrupt government officials pocketed much of the money and it was never built. In March, three former governors linked to the scandal were jailed.

“The problem is that everyone is dependent on the public health system. But after three decades of corruption, the system is a disaster,” Palacio says.

That’s apparent at Leticia’s 60-year-old public hospital, which lacks basic medical equipment and features a leaking roof and broken sinks and toilets. In April, about 30 of its doctors and nurses resigned over the lack of medical equipment and because they hadn’t been paid in months. That prompted federal authorities to intervene and take over management of the hospital. Some of the staff have since returned.

This was the hospital where Cristian Bolívar brought his father, the film actor. But he says doctors there lacked a device to measure the oxygen level in his father’s blood. So, he took his father to an expensive private clinic — but it was full.

After several more hours lying in the back of an ambulance, Antonio Bolívar was finally taken back to the public hospital where he was admitted.