By Dan Ripley for MailOnline

Primary schools have unveiled how its classrooms will look when they reopen next month in the wake of the coronavirus outbreak.

Those including children in Kingsholm Primary School in Gloucester have shown how parents will be expected to queue as they drop-off their child into pens at the start of the day.

Measures have also been applied at St Anne’s in Sale ahead of pupils returning, with staff preparing many signs and even face masks to help children in their new surroundings. 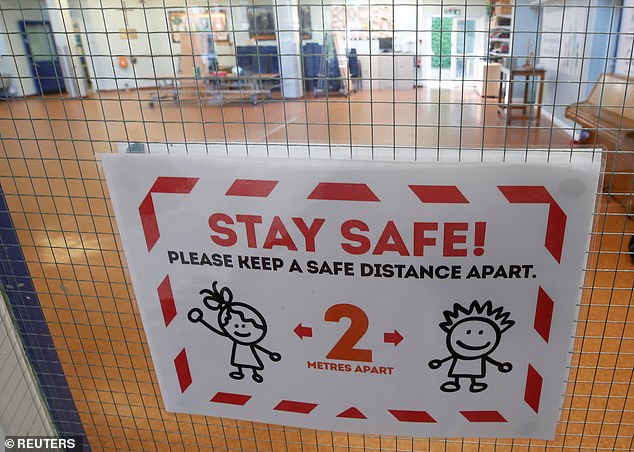 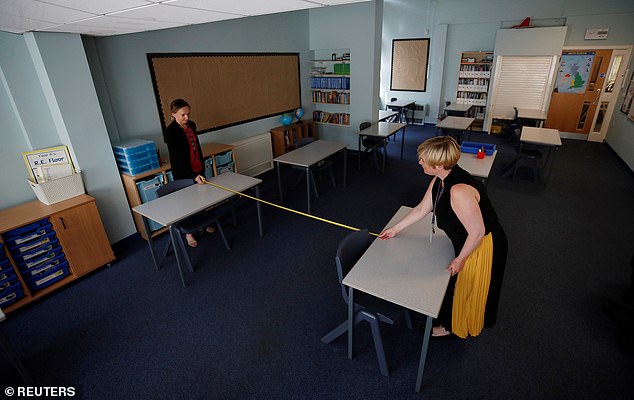 Co-headteacher Matt Ferris of Kingsholm Primary School has explained many of the new features in response to parents’ questions over how their children will adapt to social distancing measures,

They will be given a designated time slot and and allotted area  – or pen – where they leave their child before heading off along a designated walkway.

Pupils will be told to maintain social distancing between others, and they will only be allowed to mix with a small number of others.

Students who do not conform with the social distancing rules will also be sent home on a three-strikes policy. 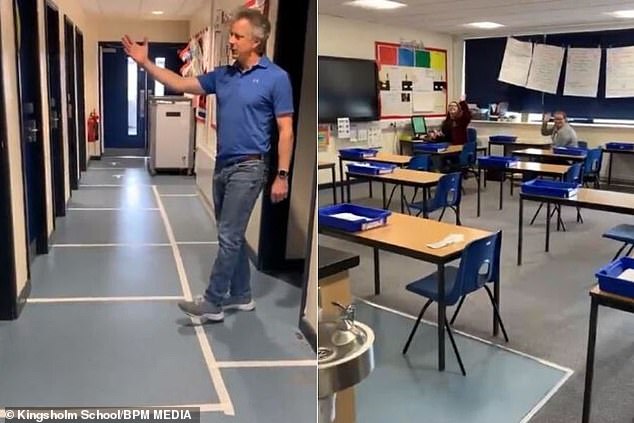 In a video published on the school’s website, Mr Ferris talks parents through what they can expect when Year 6, Year 1 and Reception and nursery children return on June 1.

Drop off and collection times will be staggered with queues and marked walkways for parents and pupils to follow.

Kingsholm is using timeslots based on surnames, with parents being asked to drop children off alone, without siblings or other children.

Pupils will be dropped off by parents in to pens that will be sectioned with barriers as they arrive. 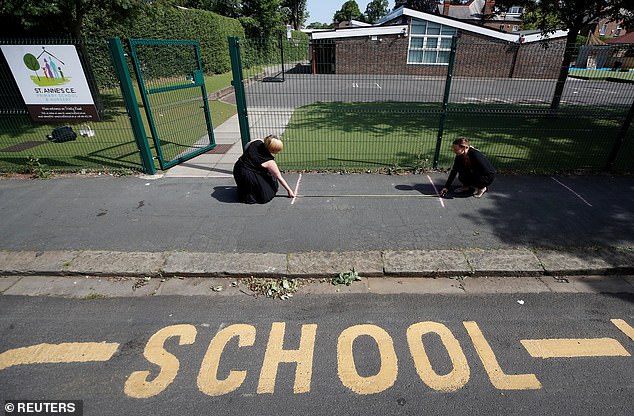 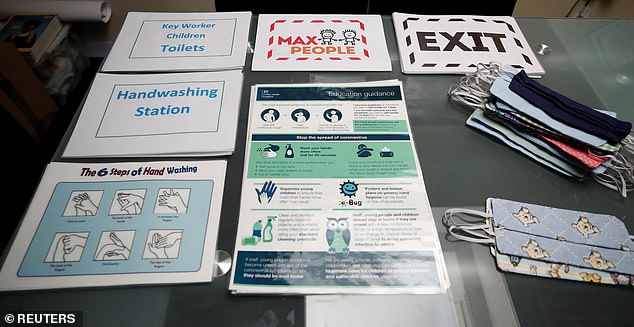 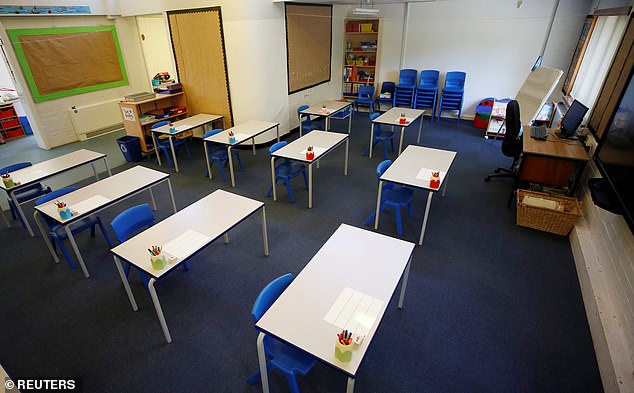 Like many schools, St Anne’s will seat their students to one child per desk in classrooms 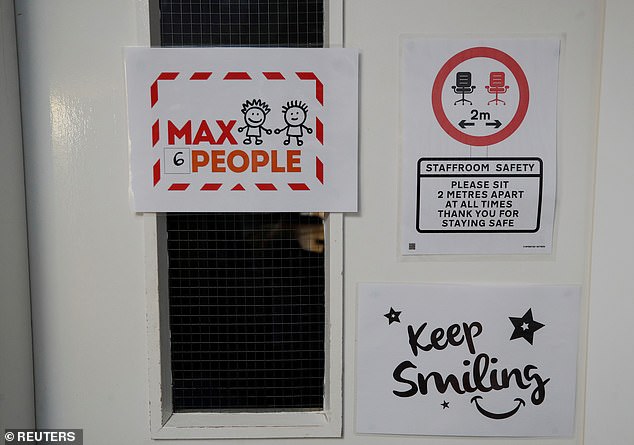 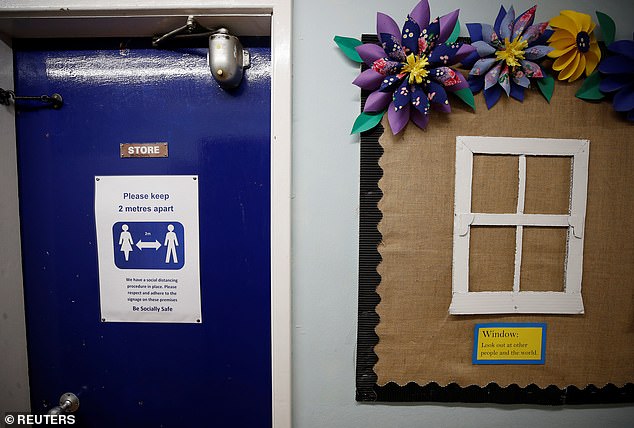 Later, a member of staff will take each group to their classroom. There is also a set route parents must follow through the school site, arriving and leaving by different entrances.

According to Headteacher Jan Buckland, the pens will be ‘roughly a quarter of the size of a netball court’ and the barriers will consist of ‘bollards with a bit of ceiling tape around to designate the area, some cones and things’.

At Kingsholm, markings have been placed on the ground on the way towards the toilets so that pupils know how far away to stand from one another as they queue. They’ve added that toilets will regularly be cleaned throughout the day.

Supply to their water fountains have been cut off with pupils expected to bring their own water to school, plus select sinks and toilet will not be functioning.

Breakfast and after school clubs have been cancelled. Classrooms will be more spaced apart with one pupil per table. Kingsholm say pupils will be expected to use their own equipment. 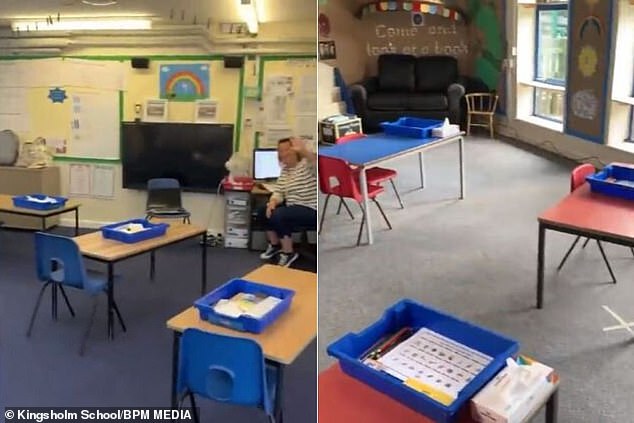 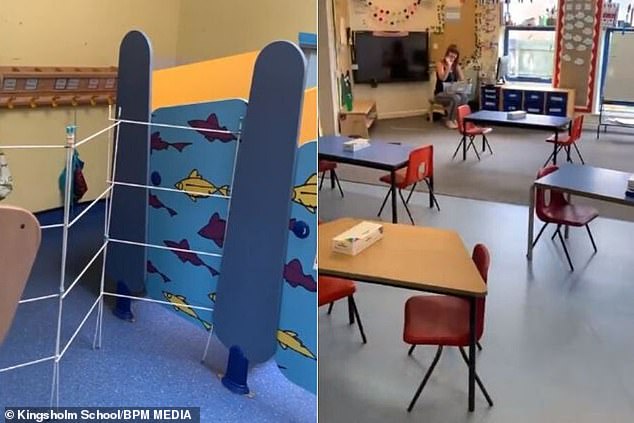 The amount of books shared will be reduced. Plus certain toys will be removed from the school to avoid cross-contamination. Mrs Buckland, head of Kingsholm, said: ‘Talking about nursery children, we cannot guarantee at all social distancing but we will encourage.

‘We will have adults who sit in places to steer children away from each other.’

She went on to say that pupils who do not follow socially distancing instructions on purpose will be sent home after a three strike rule has been deployed.

‘We will talk to the parents, if a child is being [non-compliant] then what we will do is phone the parents and the parents will then have to come and collect them,’ she said.

Kingsholm previously had an ‘open school’ policy where parents and guardians were allowed in to the classroom, this will no longer be permitted. The school is urging parents to check their child’s temperature each day before school. 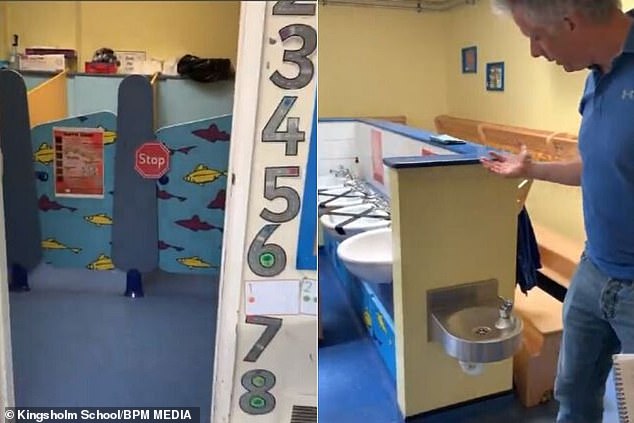 Some classrooms will have to share toilets, while water fountains (right) will be shut off 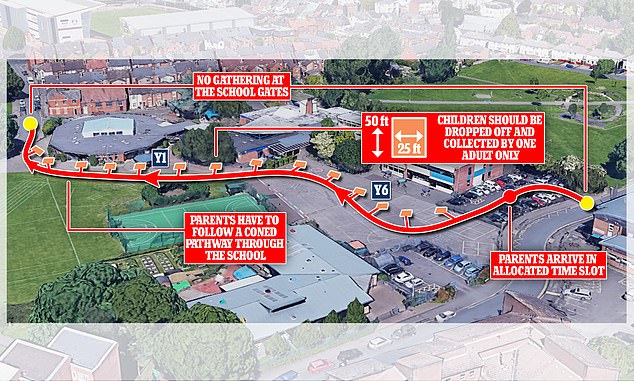 An aerial view of Kingsholm Primary school. Starting from the bottom right of the image at a given time slot, parents will follow a one-way system through the school grounds  where they will drop their children off into pens shown by the small squares en route. They will then leave the grounds to the top left of the image. Gathering at the entrance and exit gates are banned

Meanwhile, Schools Standards minister Nick Gibb told MPs that the controversial plans for reception and years one and six to go back on June 1 would depend on evidence that the rate of infection – the R rate – was continuing to drop across the UK.

Appearing virtually before the Education Committee he admitted it was ‘difficult to say’ whether the Government’s ambition to bring back all primary school children back before the summer holidays will come to fruition.

He told MPs this morning: ‘It will be totally led by the science. We don’t know for certain until tomorrow that schools will return on 1 June for reception, year 1 and year 6. That will depend on the science, although schools are planning for it and all the indications are that the science is leading in the right direction.’

D-day for schools: Final decision on whether classes will return on June 1 will be made TOMORROW and will only happen if scientists agree that R rate is low enough for it to happen

A final decision on sending tens of thousands pf primary school children back to class  on Monday will not be taken until tomorrow, a Government minister confirmed today.

Schools Standards Minister Nick Gibb told MPs that the controversial plans for reception and years one and six to go back on June 1 would depend on evidence that the rate of infection – the R rate – was continuing to drop across the UK.

Appearing virtually before the Education Committee he admitted it was ‘difficult to say’ whether the Government’s ambition to bring back all primary school children back before the summer holidays will come to fruition.

He told MPs this morning: ‘It will be totally led by the science. We don’t know for certain until tomorrow that schools will return on 1 June for reception, year 1 and year 6.

‘That will depend on the science, although schools are planning for it and all the indications are that the science is leading in the right direction. But the confirmation of that will be tomorrow.

‘So we don’t know until we see more evidence of the R factor continuing to reduce over the next few weeks.’

It comes after Prime Minister Boris Johnson appeared to confirm at the weekend that schools would open on Monday, as he sought to deflect attention from the controversy surrounding his aide Dominic Cummings.

But Downing Street insisted today that he had said the move was subject to a ‘formal review’ tomorrow. 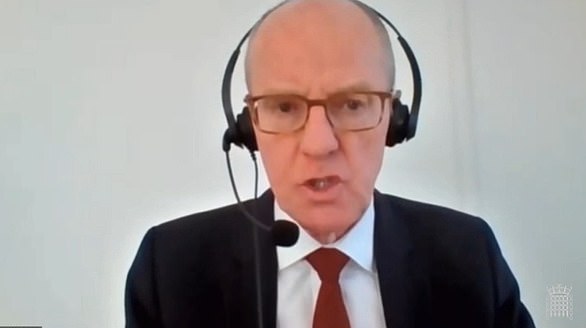 His comments came after Boris Johnson announced the Government was pushing ahead with plans to reopen primary schools to reception, year one, and year six from June 1.

MPs asked the minister to explain why a single national approach was being taken to reopen schools when there are large regional differences in level of infection, such as the north of England, and to set out how the Government is reassuring the public that schools are safe to reopen from Monday.

It comes after ministers have come under pressure from teaching unions and councils who have urged the Government to reconsider their plans to open schools more widely next week.

But Mr Gibb said: ‘I am very optimistic and confident that the vast majority of local authorities are planning to reopen their primary reception, year one and year six from June 1.’

He acknowledged there are some areas in the country which have ‘issues’ with reopening in the next few weeks, but he said the Department for Education (DfE) is working with these councils.

The minister confirmed that a decision on whether schools will reopen to reception, year one and year six will be taken on Thursday after the Government has reviewed scientific evidence.

Addressing Mr Gibb on Wednesday, Tory MP Jonathan Gullis said: ‘We have obviously talked about that we are not going to open until we know the science is safe and the Government has given a strong message about that.

‘Unfortunately the events over the bank holiday weekend by Mr Dominic Cummings has meant the Government’s message has been undermined.

‘Even though the law may not have been broken, the spirit of the law has indeed been broken.’

Mr Gullis, the MP for Stoke-on-Trent North, said he has been contacted by parents, teachers and academy chains asking how they can regain confidence in the Government’s messaging.

In response to the questioning, Mr Gibb said: ‘The more we all adhere to the rules, the more that we’ll be able to make further progress in reopening schools.’

Tory MP Christian Wakeford asked what plans were in place for primary schools that say they will not be able to accommodate all year groups before the summer holidays.

Addressing MPs on the Education Select Committee, Mr Gibb said rotas could be brought in if there is a wider reopening for years two to five.

He said: ‘Those are the issues we are addressing. How do you maintain social distancing while also bringing back later groups?

‘We are looking at all the different options, for example rotas, for those at that stage.’

The minister added: ‘That is one of many possibilities of how we bring back more children while maintaining social distancing.’