Revealed: iPhone users with Australia’s new COVIDSafe tracking app MUST keep it running in the background for it to work

A technical flaw in new COVIDSafe tracking app stops it from working on iPhones unless users have the application running in the background.

The app uses Bluetooth technology to track users who come in close contact with people who have tested positive to coronavirus.

But teething problems were discovered on Monday and Tuesday after the initial success of more than 2.4million downloads since its release on Sunday evening.

The app will remain working if iPhone users leave the app open but simply lock their phone. 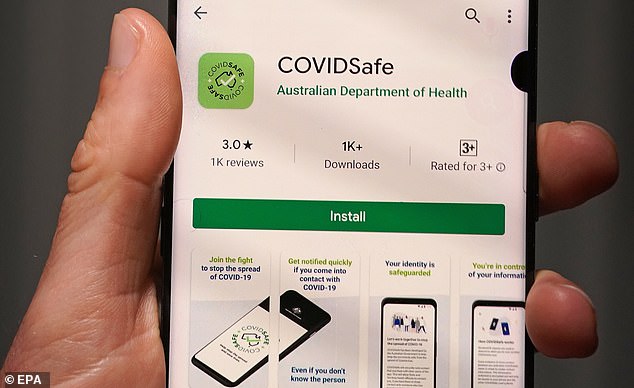 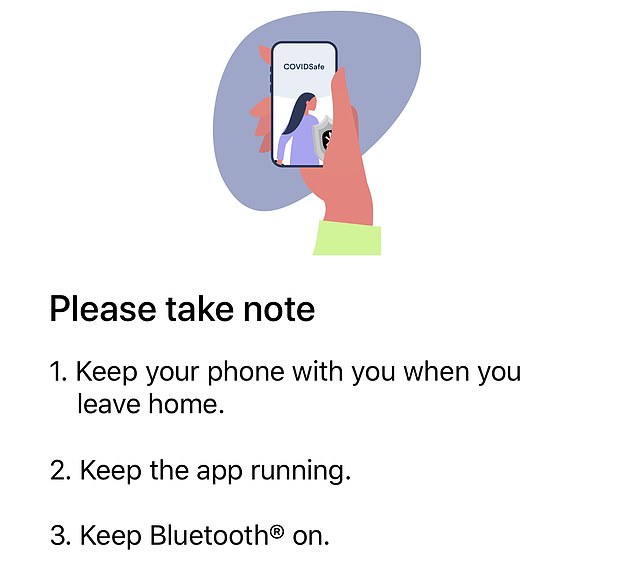 After downloading the app, users are instructed to ‘keep the app running’ and leave Bluetooth on

COVIDSafe sends out push notifications to alert users if it’s no longer running.

After downloading the app, users are instructed to ‘keep the app running’ and leave Bluetooth on.

Government app developers will need to integrate the Google version into the Apple system for the problem to be resolved.

Finder Editor In Chief and tech expert Angus Kidman told Daily Mail Australia that Apple and Google are working towards creating an ‘absolutely reliable’ version of the app.

‘We would be looking at mid-year before it’s working completely seamlessly,’ he said.

Mr Kidman said Android users could navigate the app with more ease due to its technology.

‘It’s because of the underlying architecture of the phone and how Apple has a more restrictive way of letting apps access Bluetooth,’ he said.

‘It’s an Apple approach to have tighter control over the hardware.’

But battery drainage is still an issue for app users regardless of which smartphone they have.

‘You still need to have Bluetooth running all the time which is a battery drainer, especially for people who don’t have a chance to charge their phone,’ Mr Taylor said.

‘Can imagine if you’re a supermarket worker on shift with an older model phone it would die a lot quicker.’

‘We know that globally Apple and Google are working for all of their platforms and apps to strengthen that.

‘That’s likely to be a global upgrade that’s not related to Australia or this app, which they’re fortunately bringing forward in coming days which would make it even stronger’.

The voluntary app – which utilises users’ phone numbers, age range, postcode and phone number – has already run into trouble since its successful launch on Sunday.

Some people who tried to download the app reported there were troubles getting confirmation emails, having their phone numbers recognised, and ceasing to send out a Bluetooth signal when the phone went into low power mode.

Others were alarmed and confused by a message telling them that they had contracted coronavirus, despite not being tested.

‘You have tested positive for COVID-19,’ the message read.

‘Unless you consent, your contact information will not be uploaded.

‘If you consent, your contact information will be uploaded and shared with State or Territory health officials for contact tracing purposes.’

A spokesman for Government Services Minister Stuart Robert said the message was not a flaw, and the app was working as intended.

‘You don’t upload if you haven’t tested positive, that’s the whole point of the app,’ they told Daily Mail Australia.

‘You’re only supposed to push that button if you’ve been asked to by a health official if you’ve tested positive.’

Despite the technical difficulties, Health Minister Greg Hunt was thrilled with the uptake.

Having initially expected the figure might hit one million within five days, it got to the mark in five hours, he said.

The figure rose to two million by Monday evening.

‘This effort will help protect ourselves, our families, our nurses and our doctors,’ he tweeted.

Chief medical officer Brendan Murphy said the government would never have access to the data collected.

‘We have locked this down so completely, so thoroughly with the biosecurity rule, with legislation that is coming, the only people who can access the data are the state and territory health officials,’ he told reporters.

‘We have a compact with the Australian public: this app will only ever be used by public health officials in the purposes of contact tracing.

And Mr Hunt confirmed people concerned about privacy could use a fake name to register.

The other personal information collected is a phone number, age range, and home postcode.

Prime Minister Scott Morrison had said 40 per cent of the population needed to install the app for it to be effective.

The government has been campaigning for Australians to use the app as a prerequisite to swiftly end strict lockdown measures.

AUSTRALIA’S COVIDSAFE APP – WHAT YOU NEED TO KNOW

It only works on smartphones and can be downloaded from the Apple or Google app stores.

Use of the app is voluntary.

* To identify people who may have come into contact with someone who has COVID-19 so that they can be advised to take measures to help stop the spread of the disease or get tested.

Registration will require users to input their:

* mobile phone number – so they can be contacted if needed for contact tracing.

* name – so the relevant health officials can confirm they are speaking to the right person, although the Health Minister says you can use a fake name if you want.

* postcode – to make sure health officials from the right state and territory are dealing with your case.

* the Bluetooth signal strength of other COVIDSafe users you come into contact with. This will be logged every two hours in the National COVIDSafe data store.

* No location data will be collected at any time.

* Contact data stored on a device will be deleted after 21 days.

* All data stored will be deleted once the pandemic has concluded.

* Personal information collected via COVIDSafe will handled in accordance with the Privacy Act 1988 and the Biosecurity Determination 2020.

* There will be criminal penalties and anyone breaches someone’s privacy.