Hundreds of police officers in face masks have congregated at a banned Black Lives Matter rally in Sydney – and have warned they won’t hesitate to arrest protesters.

Demonstrators will gather in Sydney and Melbourne this weekend for a second round of rallies after 90,000 took to the streets in solidarity with the global movement a week ago.

A rally calling for an end to Aboriginal deaths in custody – planned for Sydney Town Hall on Friday evening – was deemed unlawful by NSW Police because they weren’t formally notified.

Police officers showed up in force two hours early and in a last-ditch attempt to avoid authority, protesters decided to move the gathering to Hyde Park.

‘Due to the overwhelming police presence at Town Hall, we will now be starting from the Archibald Fountain in Hyde Park,’ a Facebook post read.

Police followed the activists to Hyde Park at 6.30pm and immediately attempted to disperse the crowds. 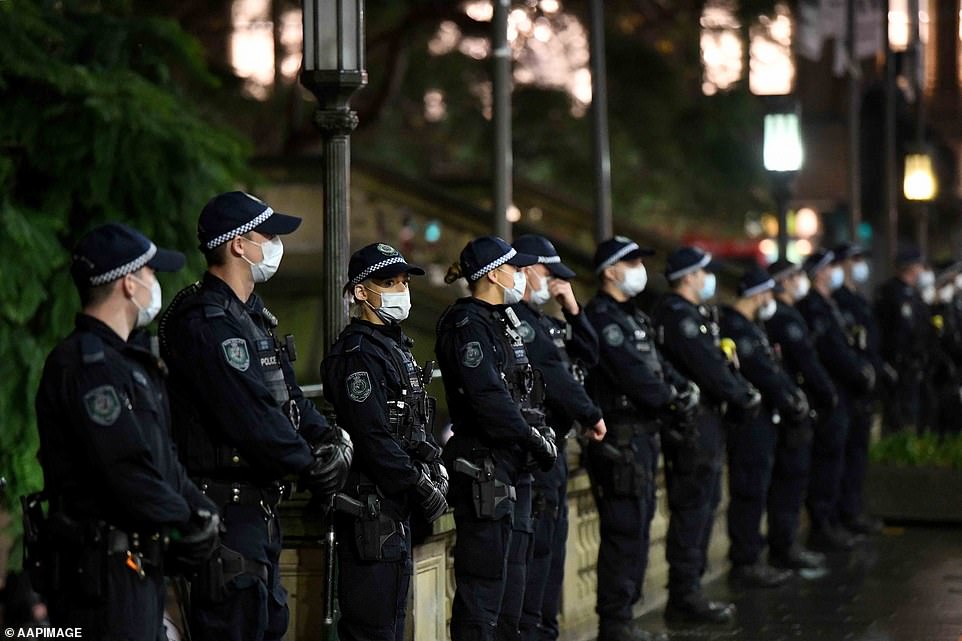 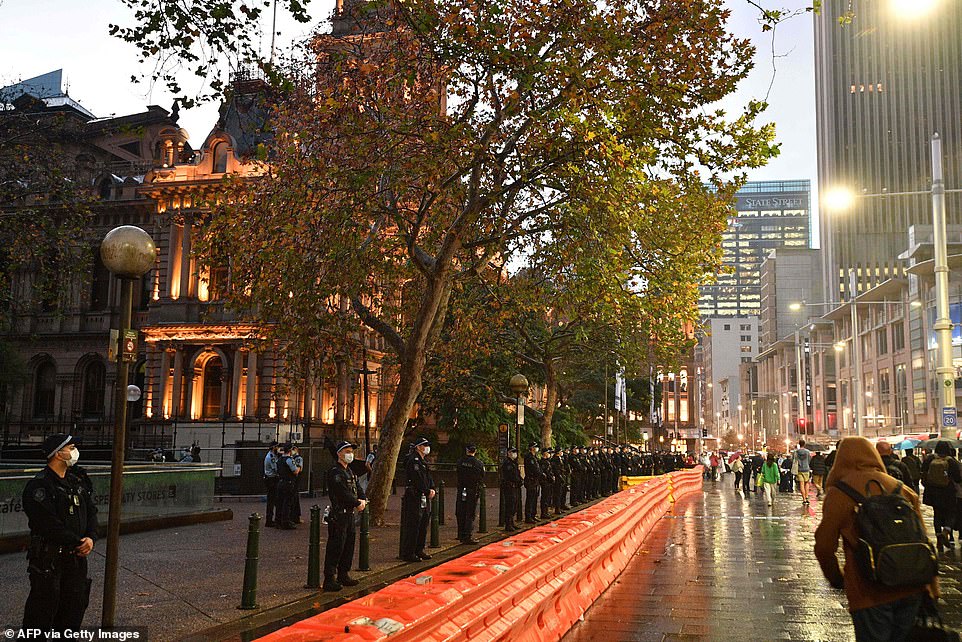 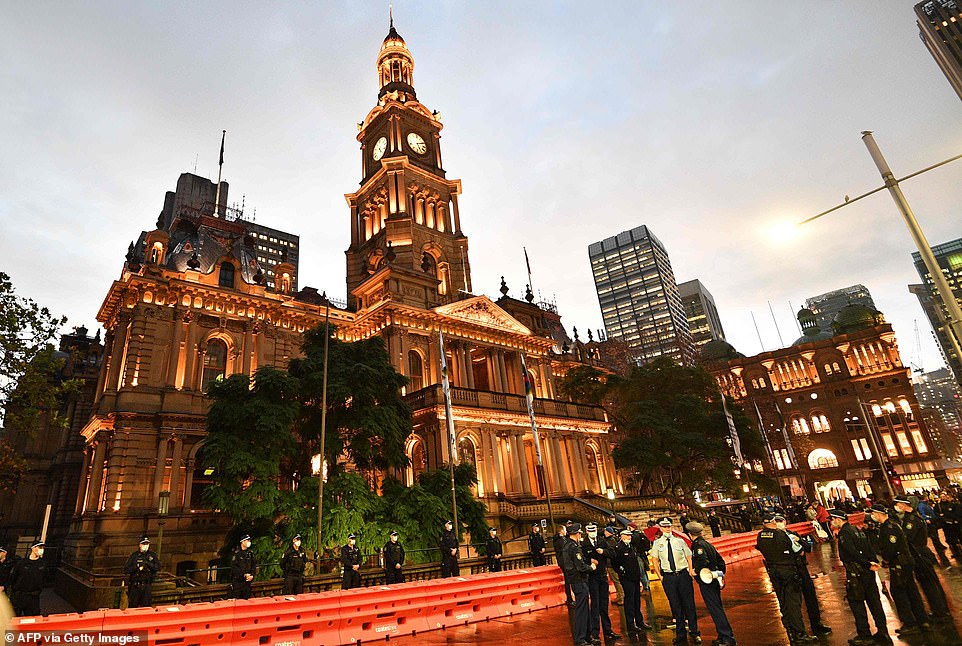 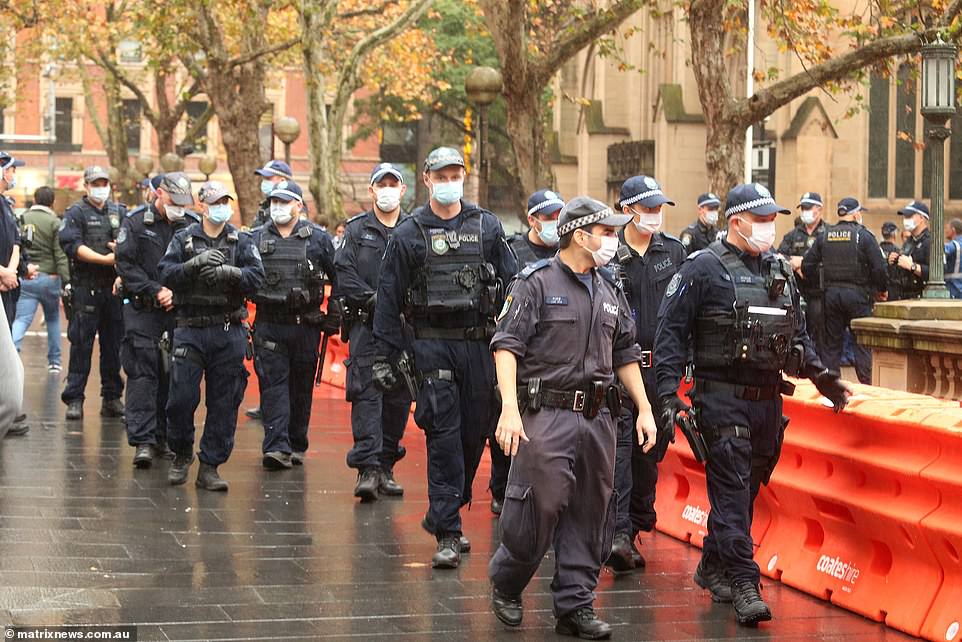 Friday’s protest will be followed by separate events on Saturday calling for the release of refugees in detention around Australia.

None of the protests are authorised by police and the NSW Supreme Court struck down a challenge by organisers of the Sydney refugee rally on Saturday.

Participants therefore risk fines or arrest by being in breach of coronavirus limits on mass gatherings, and are not allowed to block traffic.

Outdoor gatherings are limited to 10 people in NSW and 20 in Victoria – far from the thousands planning to show up anyway.

Prime Minister Scott Morrison declared that every protester should be fined or arrested if they break the rules, but police chiefs have called this impractical.

A ‘stop black deaths in custody’ protest was scheduled to begin at 6.30pm on Friday outside the Sydney Town Hall with up to 4,000 people expected.

The protest was moved to Hyde Park due to the heavy police presence.

The event is a successor to the 50,000-strong march last Saturday in solidarity with BLM protests that have sprung up in the U.S. after the alleged murder of George Floyd by police.

The protest is organised by Anticolonial Asian Alliance, Indigenous Social Justice Association, and the University of Sydney Autonomous Collective Against Racism.

AAA is a shadowy group of activists of Asian descent who ‘work in solidarity with First Nations communities and elders to dismantle colonialism’.

Group member Eme, a 26-year-old artist and activist, explained her desire to fight ‘colonialism’ in a recent interview with the National Association for the Visual Arts.

‘We’re taught to hate ourselves, to hate our brown skin, our features and, and for us to love ourselves and that’s pretty much to be Indigenous as well and to unpack all of the self-hatred and the colonised mentality,’ she said. 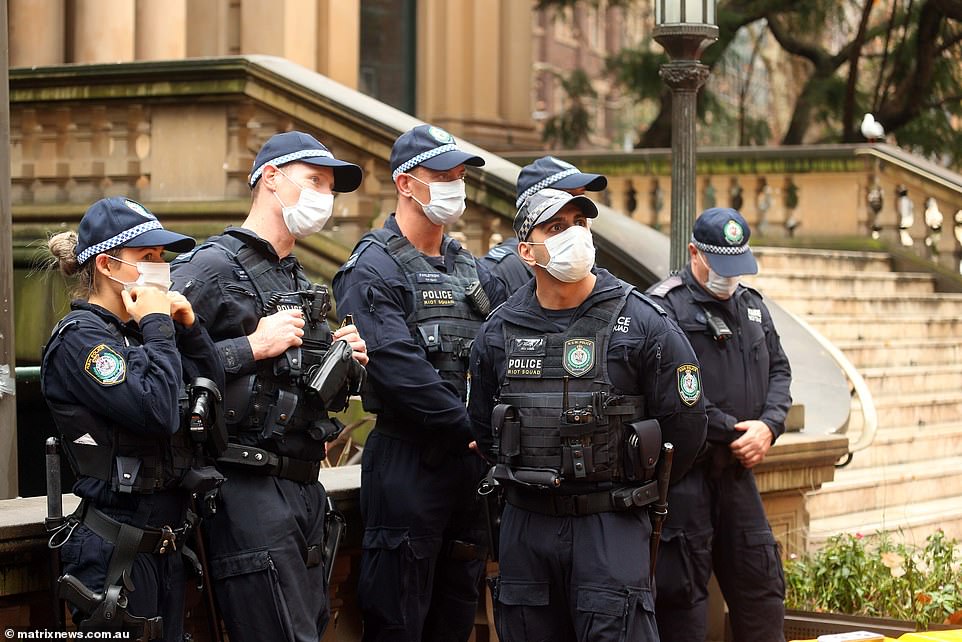 The ‘stop black deaths in custody’ protest will begin at 6.30pm on Friday outside the Sydney Town Hall with up to 4,000 people expected 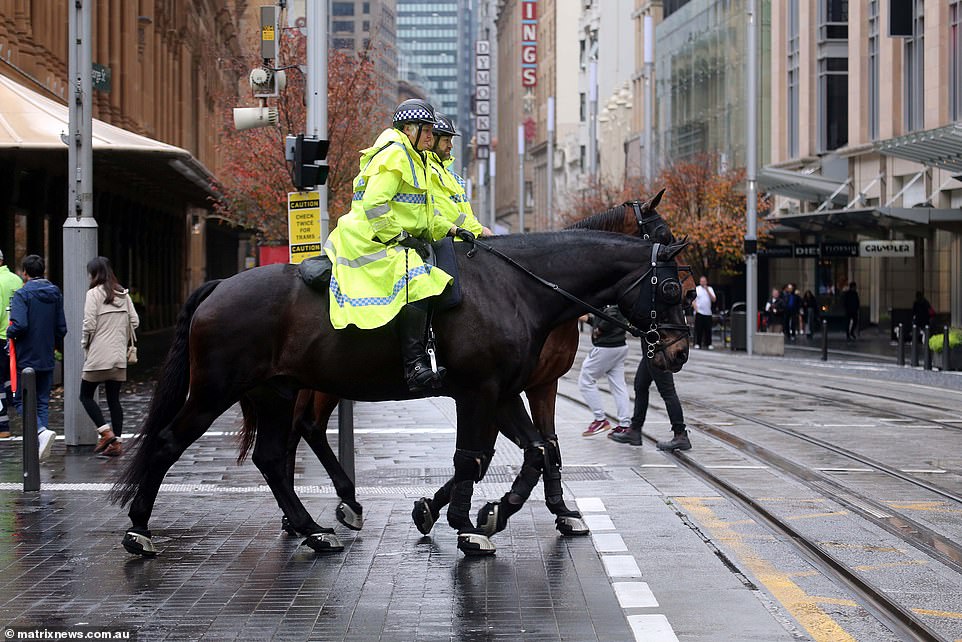 AAA posted a graphic of a hooded woman holding a finger to her lips encouraging people not to ‘snitch’ on protesters breaking the law.

‘Don’t snitch! Let’s keep each other safe from all forms of harm, including state violence,’ the graphic read.

‘Instead of calling Crime Stoppers, try to have caring conversations with people about the importance of ­distancing.’

Raul Bassi, a leader in ISJA, is a veteran activist and the primary organiser both of Friday’s protest and the march last Saturday.

A driver for Toll Fast Office in Banksmeadow by day, he has a long history as a protest organiser for Aboriginal and Palestinian causes.

‘It was a beautiful protest last week, we were going strong. Only three people were arrested at the end,’ he said.

‘This event will be about the inhumane treatment of people in Long Bay prison.

‘Maybe instead of the government taking us to court, we will take them to court.’ 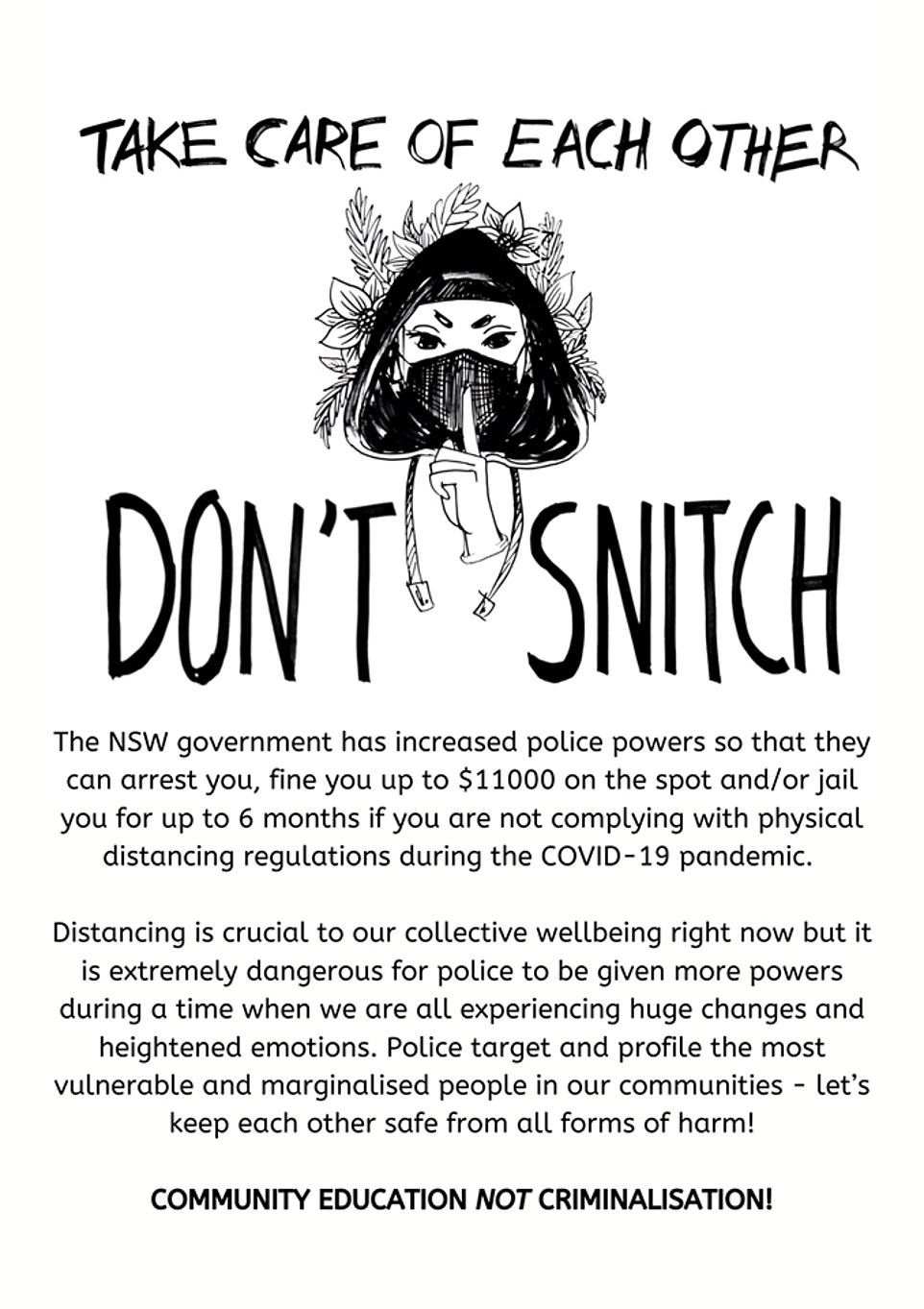 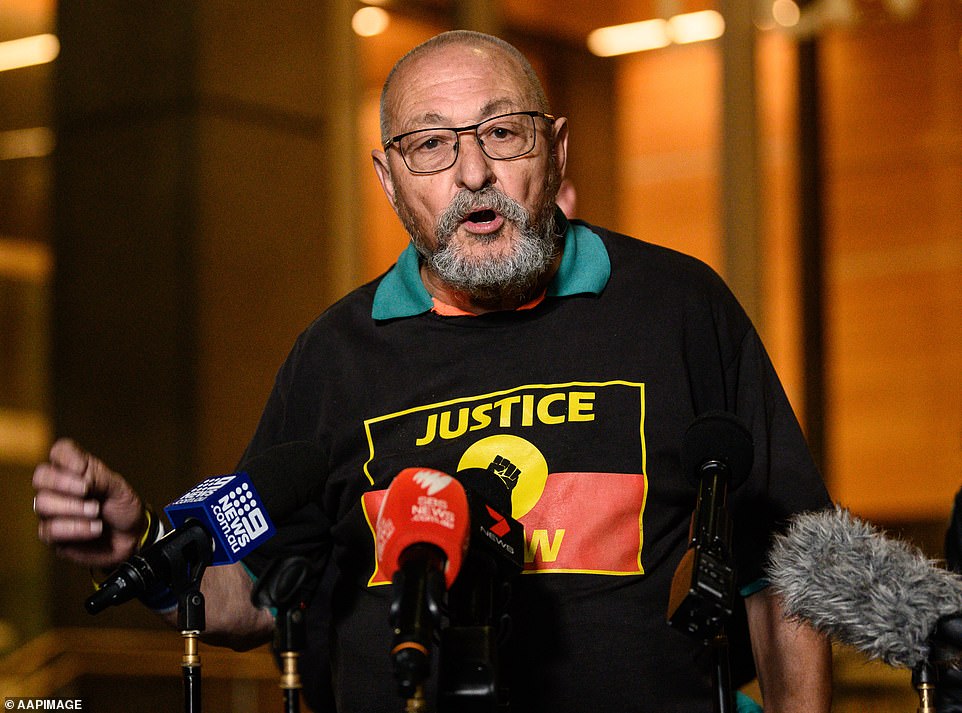 Raul Bassi, a leader in ISJA, is a veteran activist and the primary organiser both of Friday’s protest and the march last Saturday 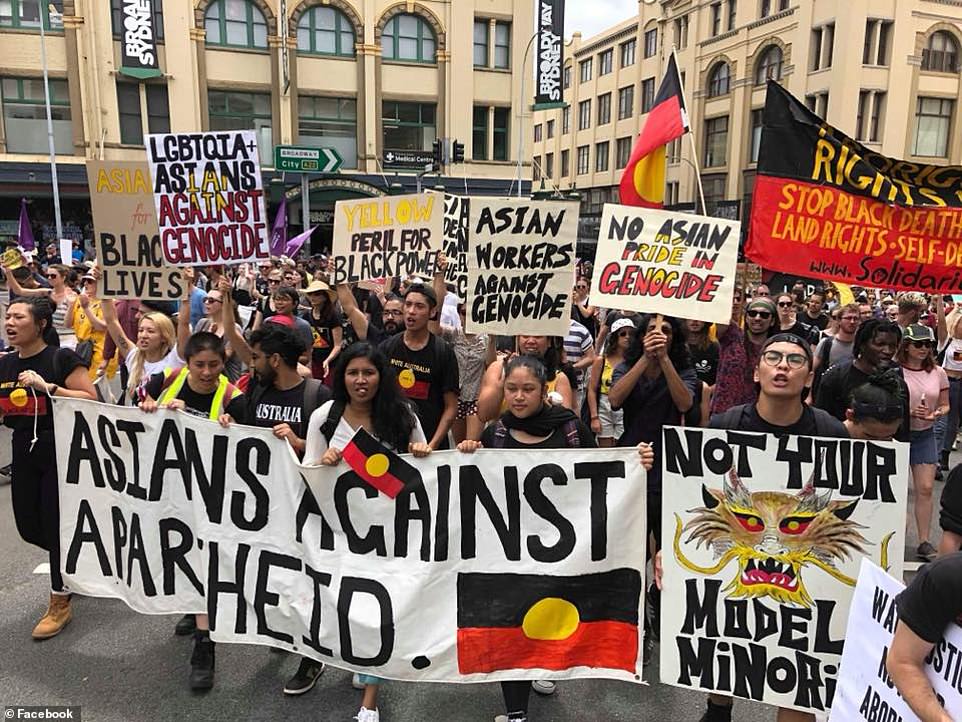 Anticolonial Asian Alliance led the 50,000-strong march last Saturday in solidarity with BLM protests that have sprung up in the U.S. after the alleged murder of George Floyd by police

Mr Bassi said racism was just as important, urgent, and deadly issue as coronavirus, and the protest was therefore necessary.

‘Yes the virus is a big problem. But we think there is another virus going around, and we have to respond now,’ he said.

‘That virus is the virus based in racism. It’s a virus that kills Aboriginal people.’

The University of Sydney Autonomous Collective Against Racism is an official branch of the university’s student union.

Harilaou is a writer and activist who describes herself as ‘agender’ with Christian Chinese-Indonesian background in a column for SBS in April.

‘I have openly let go of womanhood. I no longer identify with the gender assigned to me at birth – a common way of understanding trans identity,’ Harilaou wrote. 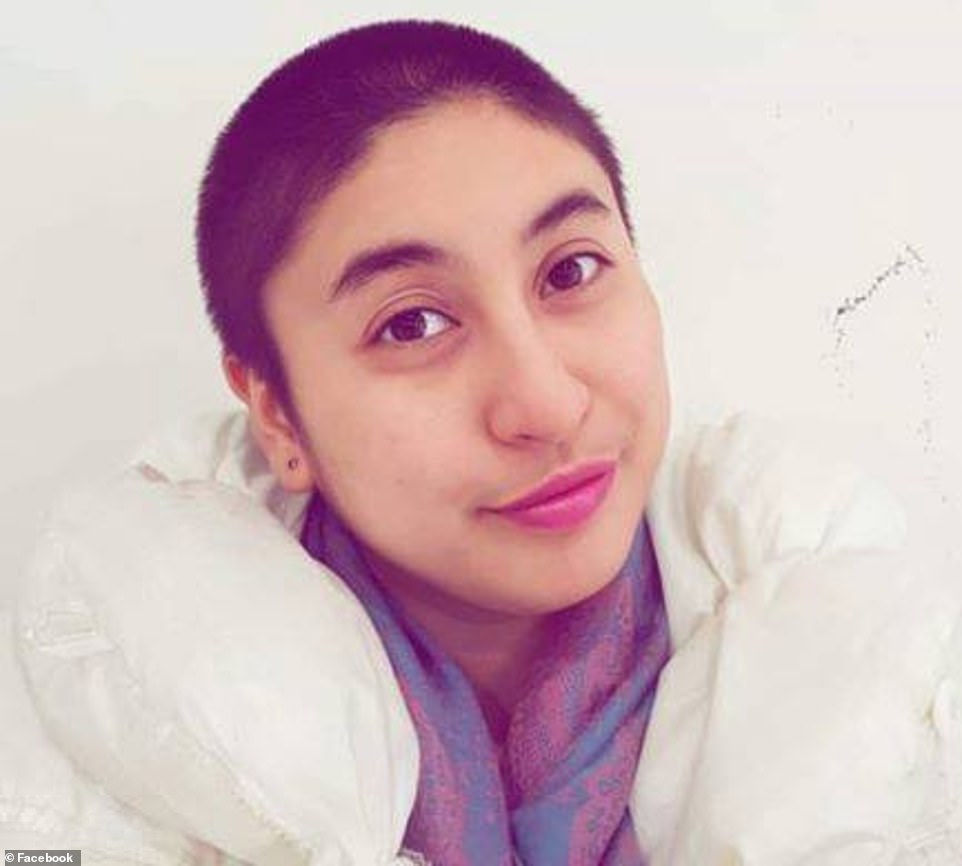 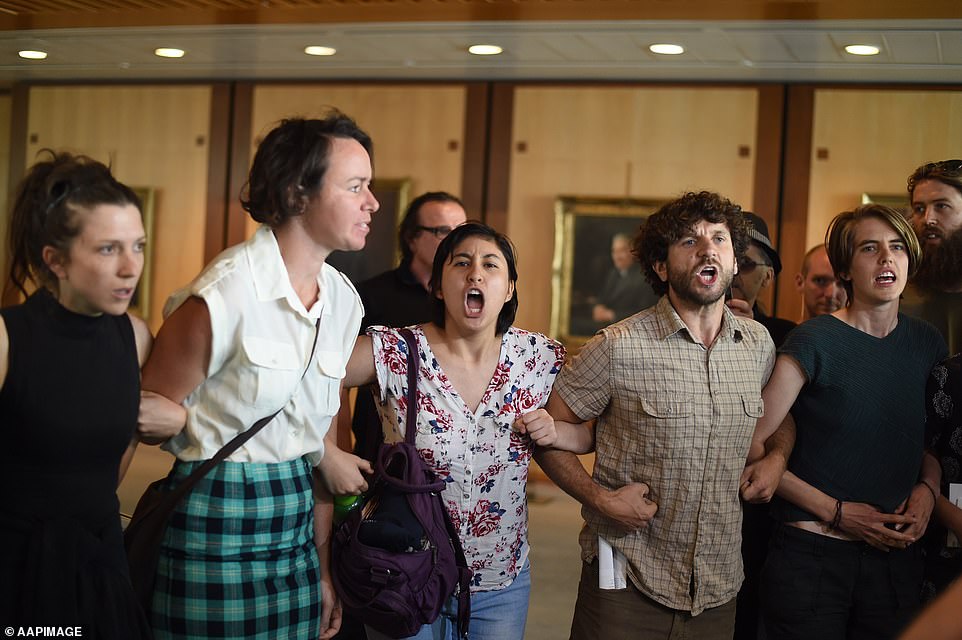 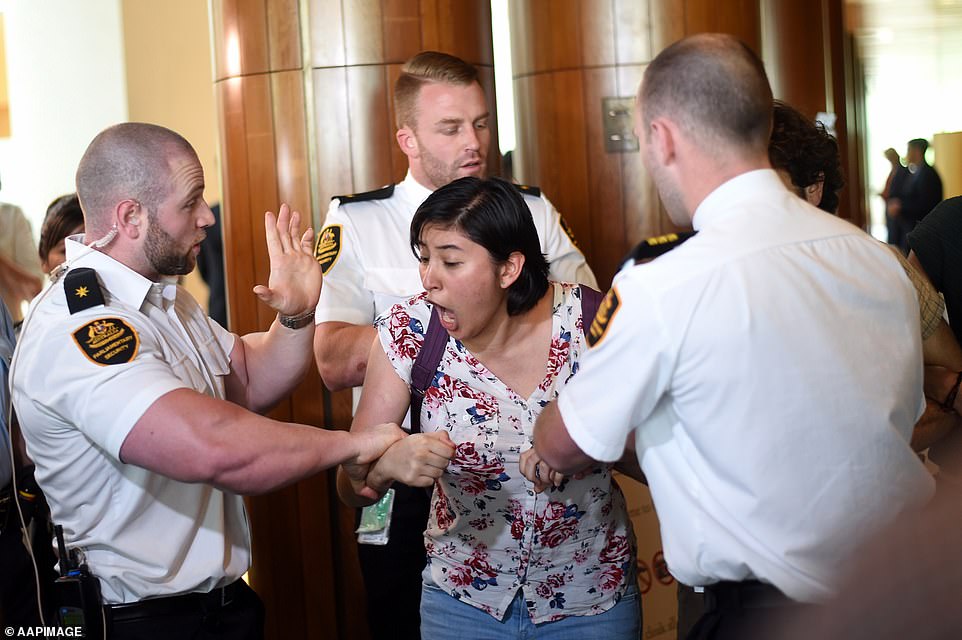 ‘My gender has become a space where I can actively let go of all the gendered societal and cultural norms that were forced onto me, and build my own gender expression and embodiment.

‘I have settled on the word ‘agender’, meaning without gender or no gender. Now, the word woman simply describes a relationship to patriarchy, it is a power dynamic, an external construct that has nothing to do with who I am on the inside.’

She was dramatically arrested during a protest in 2016 and has been part of other demonstrations where other activists were arrested.

Harilaou accused police of instigating the ugly scenes at Central Station at the end of last Saturday’s protest in Sydney.

‘We made a choice to march when the courts said it was illegal & we stood our grand when police advanced. I’m proud of my comrades,’ she wrote on Twitter afterwards. 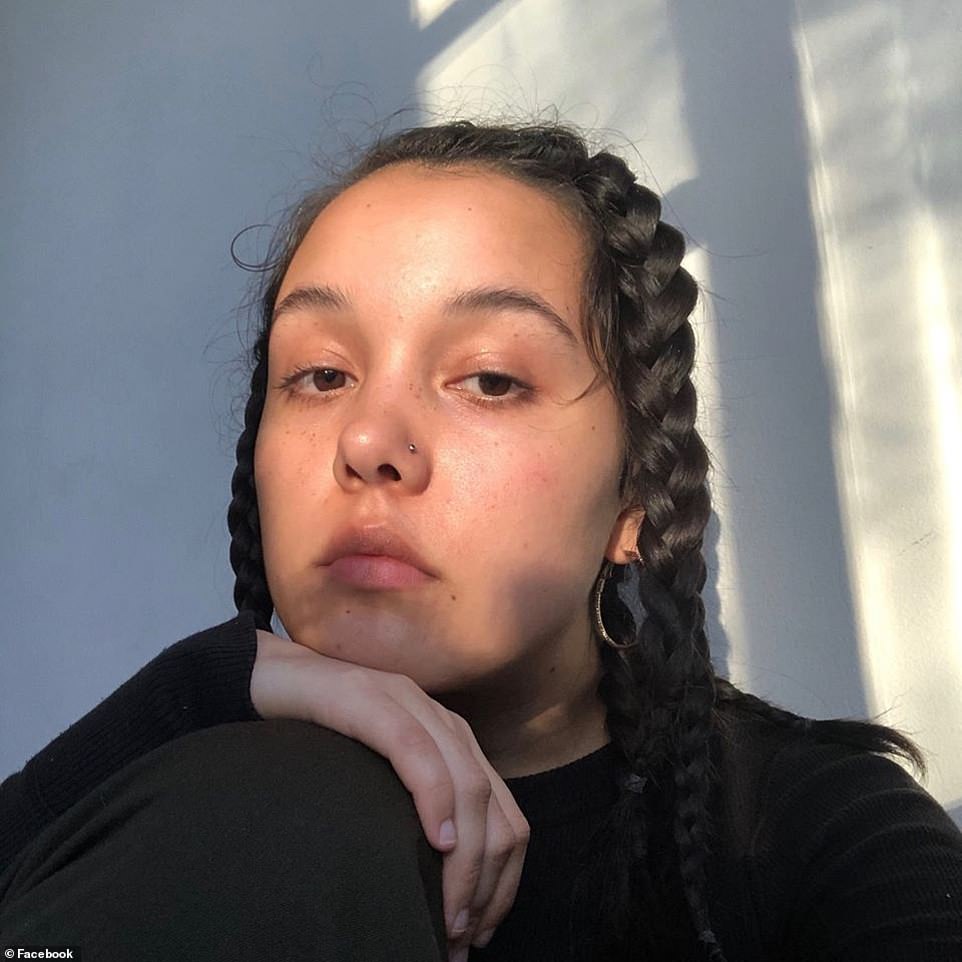 Another University of Sydney organiser, Tabitha Prado-Richardson, describes herself as a writer, researcher and astrologer of Afro-Nicaraguan heritage

‘I’m uninjured physically but hurting for the state of society. No justice, no peace, abolish the police.’

Ms Prado-Richardson describes herself as a writer, researcher and astrologer of Afro-Nicaraguan heritage.

Friday’s protest is squarely focused on Aboriginal deaths in custody after inmates were tear gassed during a riot at Sydney’s Long Bay jail on Monday.

Prisoners spelled out ‘BLM’ in the exercise yard during the aftermath of two fights between groups of inmates.

Corrective Services said the Immediate Action Team was quelling a riot but protest organisers presented it as police brutality.

‘These violent and harsh responses are inhumane, particularly during a time where family visits have been ceased for over two months with no plans announced to reverse this,’ the event page claims. 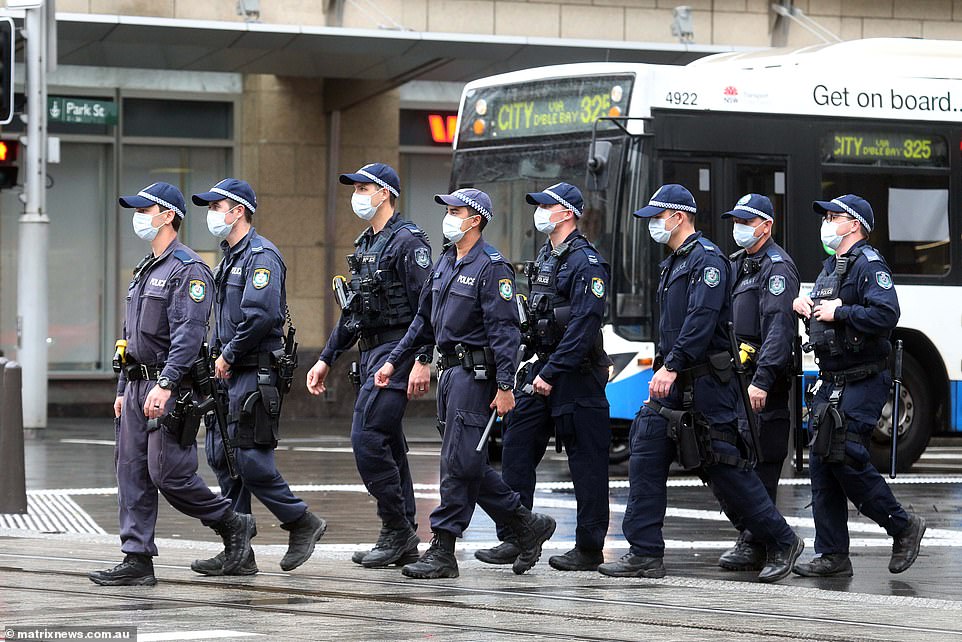 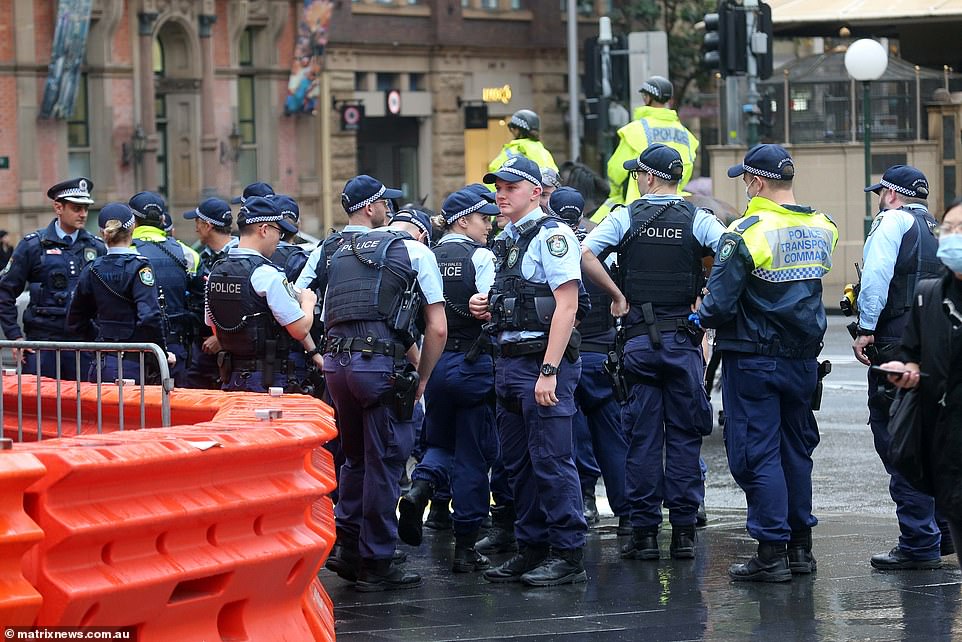 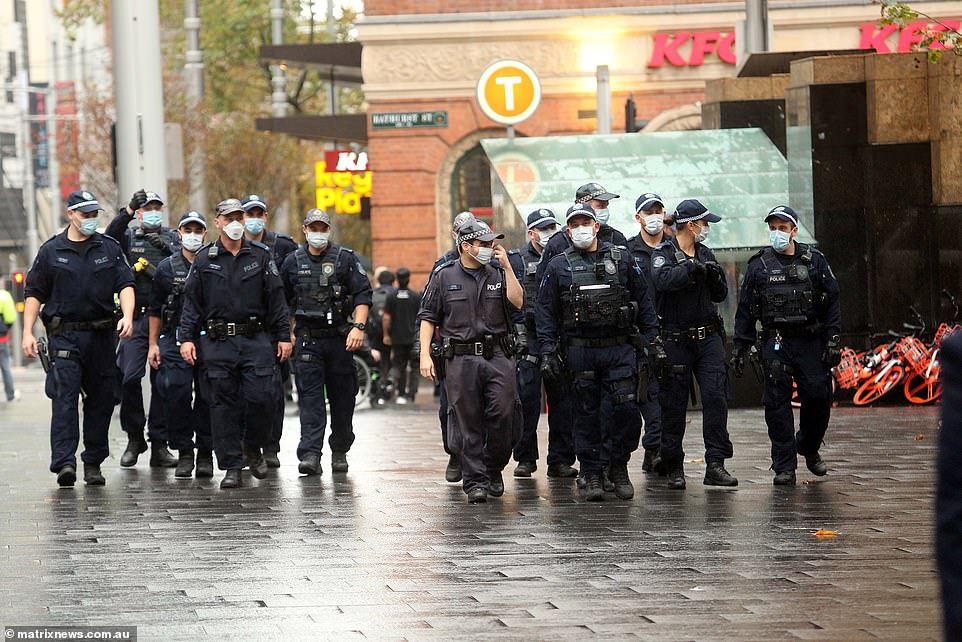 Police wore masks to protect themselves from coronavirus as they massed in groups waiting for up to 4,000 protesters to arrive

‘Police brutality is not an insular event – it is a result of a carceral system that actively uses violence against incarcerated people, of whom many are First Nations.

‘We cannot sit idly by while these injustices happen across prisons in Australia, nor can we rely on the government to hold themselves accountable – this is why we fight for justice.’

He said police would deploy ‘significant resources’ to enforce coronavirus rules and could issue move on notices or make arrests.

A protest demanding refugees held in immigration detention be released will go ahead in Sydney despite the Supreme Court ruling it unlawful.

Refugee Action Coalition applied for the protest to be authorised so participants would be exempt from coronavirus gathering limits.

‘We wouldn’t be putting people in any different situation from what they experience when they go to the shopping centre or get on a train or bus,’ organiser Nick Riemer told the Today show on Friday morning.

Dr Riemer is a senior lecturer in English and Linguistics at the University of Sydney and veteran protest organiser who also championed the BLM rally last Saturday. 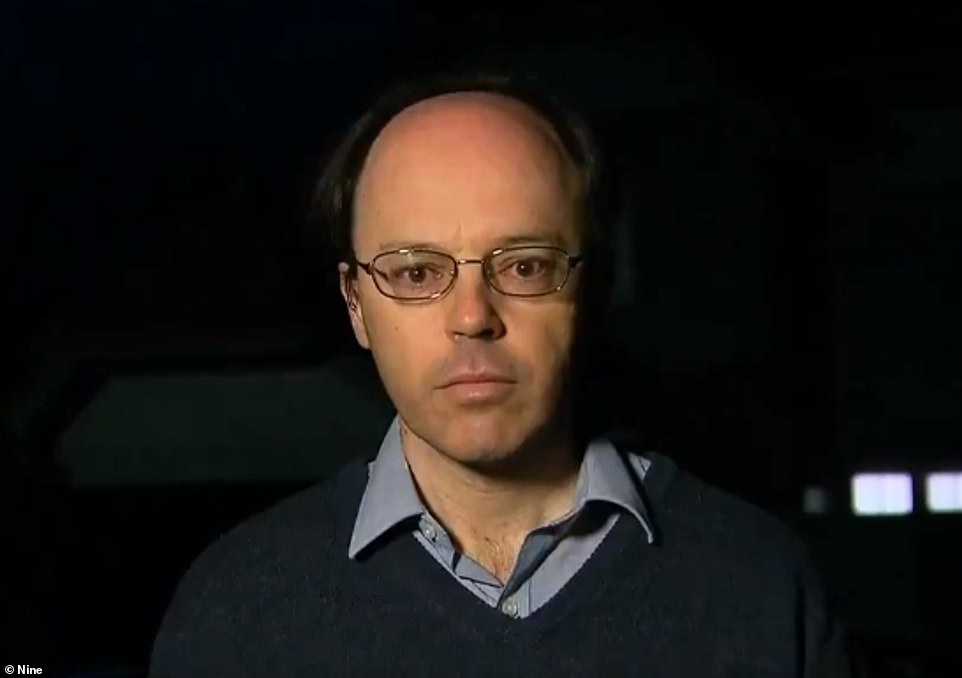 He argued the protest was about coronavirus because refugees were kept in crammed, unsanitary conditions that left them vulnerable to infection.

‘When the authorities want to stop a protest they invoke health reasons. When they want to torture refugees, health goes out the window,’ he tweeted after the Supreme Court decision.

‘Our calls for freedom and justice mustn’t be silenced.’

Dr Riemer railed against the BLM protest being struck down by the court last week before that decision was overturned on appeal.

‘I’m not going to let public health become the latest excuse for the umpteenth ratification of state violence against Aboriginal people,’ he wrote.

Professional activist James Supple is another organiser of Sydney’s refugee rally who addressed the court at RAC’s failed bid to have it approved.

‘I don’t accept it’s a gross breach of the guidelines,’ he told the court said. 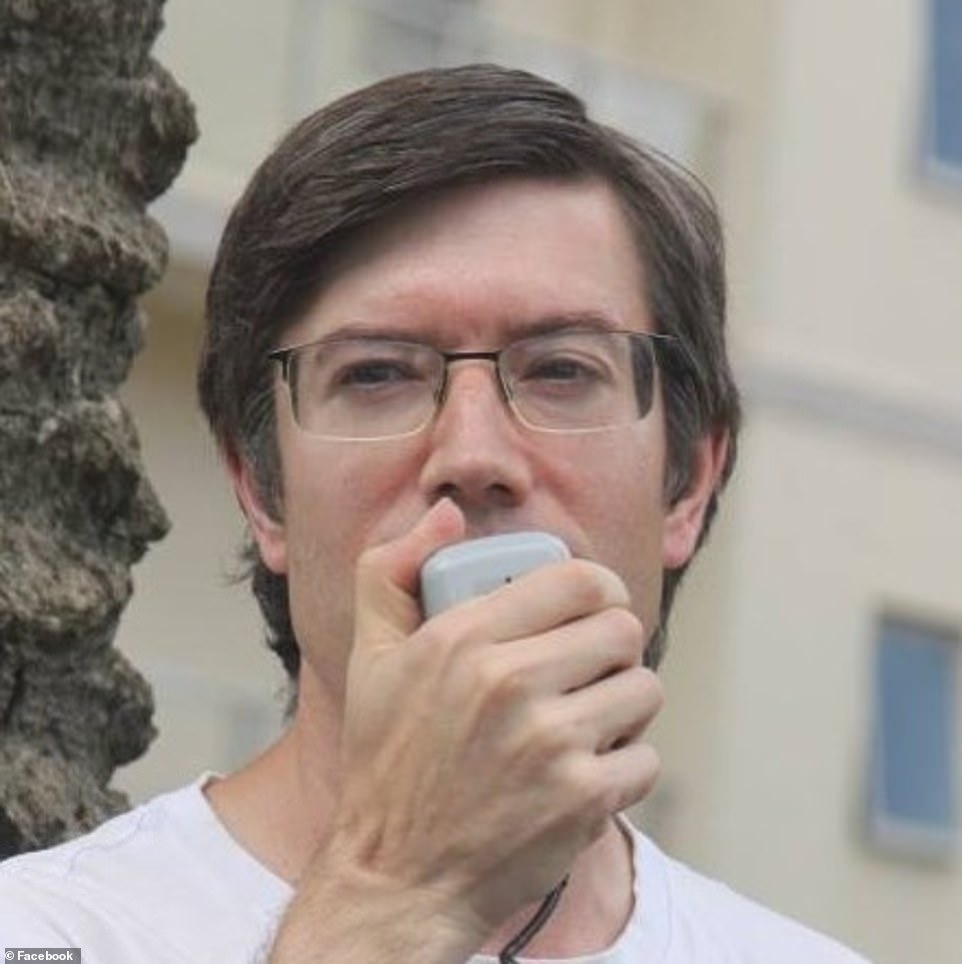 Mr Supple said only 150 to 200 protesters were expected and this would not make social distancing difficult to manage.

All participants would be asked to wear masks and their details would be taken in case contact tracing was necessary.

RAC’s lawyer Barrister Emmanuel Kerkyasharian said the protests could not be delayed, as police requested, because of the plight of refugees.

‘The purpose of this protest is to deal with people who are in prison against their will, in effect,’ he told the court.

‘Every day matters. Every day that that goes on matters.’

However, Justice Michael Walton sided with the police and refused to authorise the protest due to health risks.

‘Those public health risks, even in mitigated form, outweigh rights to public assembly and freedom of speech in public context,’ he said.

‘I urge those thinking of protesting despite the Supreme Court decision and against the health advice to promptly reconsider their plans,’ he said.

A similar protest is planned for Melbourne on Saturday as part of a ‘national day of action’ for refugee rights.

This one is led by the Refugee Action Collective, and planned as a ‘decentralised’ campaign to comply with coronavirus restrictions.

One of the organisers listed on the contact list of the effort is schoolteacher Lucy Honan, who faced public scrutiny for her activism in 2016.

She co-founded Teachers for Refugees and was accused of ‘brainwashing’ students by concerned parents.

Ms Horan was reprimanded in 2012 after telling children they didn’t have to sit compulsory NAPLAN if their parents had philosophical or religious objections. 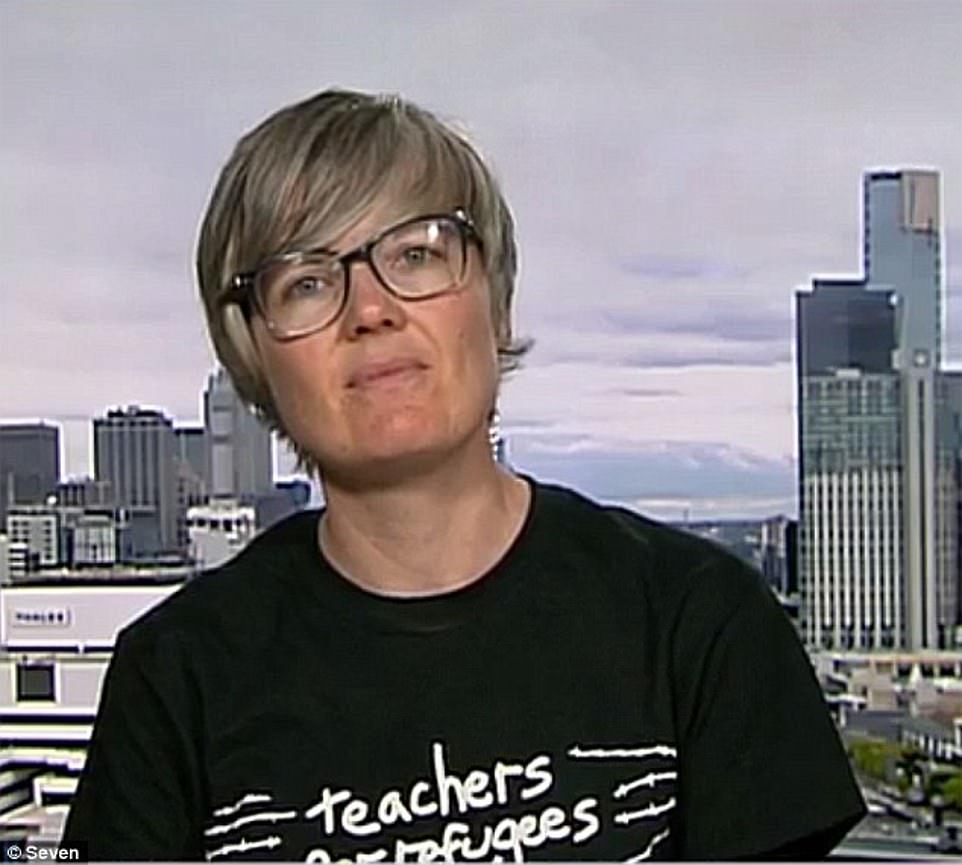 One of the leaders of Refugee Action Collective is schoolteacher Lucy Honan, who faced public scrutiny for her activism in 2016

On a separate occasion Ms Horan was ‘verbally reprimanded’ after she failed to prepare her class correctly for a test.

The group of up to 500 educators wore shirts emblazoned with ‘Close the Camps, Bring them Here’ in a 2016 campaign.

‘Some of us have taught refugees in offshore camps, or here in the community, and we know that they are denied basic human rights,’ Ms Honan said at the time.

‘We know there are both teachers and students on Nauru and Manus who should be in our schools, not in prison camps.’

Protest organisers said Saturday’s campaign would be spread across eight locations around Melbourne including hotels and detention centres holding refugees.

‘Police have told us that if we have more than 20 people, even at different times, we will be in breach of health laws and get fined,’ organisers said.

‘We think that this is an absurd and politically biased interpretation of the health laws, however in order to avoid further fines for refugee supporters… we have decided to make this protest decentralised.’