Britain’s coronavirus outbreak was NOT sparked by one ‘patient zero’: Study finds more than 1,300 different strains of the virus were brought into the UK with 77% of them coming from Spain, France or Italy

At least 1,300 different people brought the coronavirus into Britain to trigger the country’s crippling epidemic, a study has revealed.

The research rules out the idea of one super-spreader or ‘patient zero’ sparking the nation’s outbreak, showing that hundreds of individuals seeded the crisis.

A vast majority of all the cases – scientists found 1,356 different strains of the virus, most of which arrived in March – came from France, Italy and Spain.

These strains were found in 16,500 people in Britain who tested positive for the infection, and scientists worked out where they came from by calculating different strains’ last common ancestors in samples taken in other countries.

Results revealed 34 per cent of the SARS-CoV-2 specimens could be traced back to strains circulating in Spain. Another 29 per cent were pinpointed to France, followed by 14 per cent pinned to Italy. These made up 77 per cent of the total.

Experts have suggested that people who went on ski trips in the Alps in February half-term, as well as Spanish football fans who attended a match between Liverpool and Atletico Madrid at Anfield on March 11, may have ignited the UK’s crisis.

And the study suggested only 0.08 per cent of British cases could be traced to a strain coming directly from China, where the pandemic began.

It came as a separate report claimed Covid-19 outbreaks have been worse in areas with major airports, describing the UK as a prime example of where constant flights had ‘facilitated contagion’.

Ministers have throughout the crisis refused to shut the borders to travellers, opting instead only to advise people not to travel — despite nations such as China and Italy banning travel or quarantining visitors.

One leading health expert said that closing borders is a tricky policy to get right and has to be ‘very smart or absolute’ in order to work. 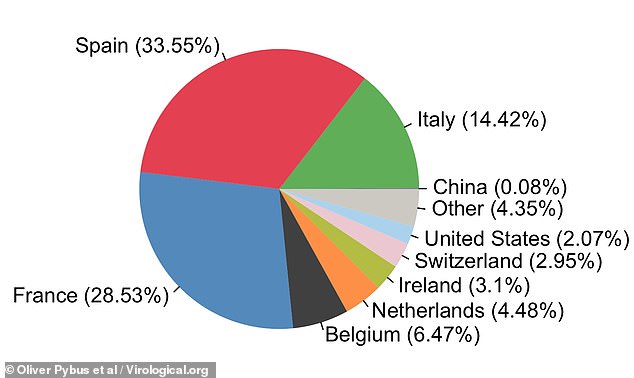 A study by researchers at the universities of Oxford and Edinburgh estimated that most of the imported cases of coronavirus in Britain came from Spain, France and Italy, and that only a tiny fraction came from Asian countries, with just 0.08 per cent transmitted by people travelling from China (Study published on Virological.org)

‘Closing borders has to be either very targeted & smart (impossible in early stages pandemic) or absolute to have any real impact’.

Professor Gary McLean, an immunology professor at London Metropolitan University, told The Guardian: ‘If we’d started much earlier with severe external restrictions, it would have reduced the cases coming here and the onward transmission. We didn’t do it until too late.’

The new study, led by experts at the universities of Edinburgh and Oxford, who form the Covid-19 UK Genomics Consortium, also looked at almost 12,000 SARS-CoV-2 samples from across the world.

This allowed them to work out the ‘last common ancestors’ of each strain of the virus they found in the UK.

Each genetic variation that can be observed by scientists constitutes a different ‘lineage’ of the virus. This is, in effect, a different signature for each generation of a virus.

By comparing recent samples of the virus to ones that were taken at earlier dates from other areas, scientists can pin-point which ones look most similar to the viruses that are circulating in the present day, suggesting they are the ancestors of the current strains.

Writing in the study, the team said: ‘We detected 1,356 transmission lineages in the UK to date.’ But they added this was likely to be an ‘underestimate’.

The finding rules out the prospect that Britain’s crisis — which began to spiral out of control in March — could all stem down to one case, often dubbed ‘patient zero’.

And experts, led by Professor Oliver Pybus — an infectious disease expert — claimed most of the imported Covid-19 cases occurred in mid-March.

It was during March that the Government faced calls to ban international travellers but refused to do so. 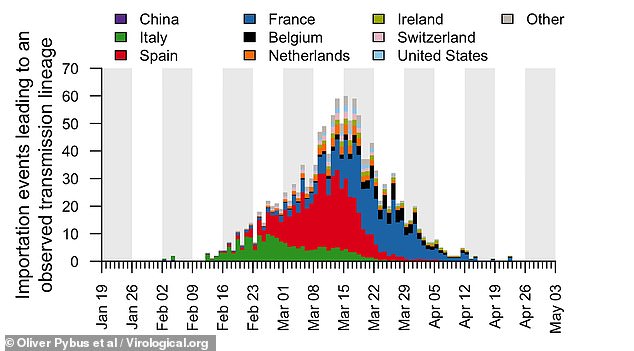 Professor Pybus’s research showed that strains of the virus from Italy appeared to have set off the UK’s outbreak, then those from Spain and France kept it rumbling on throughout March 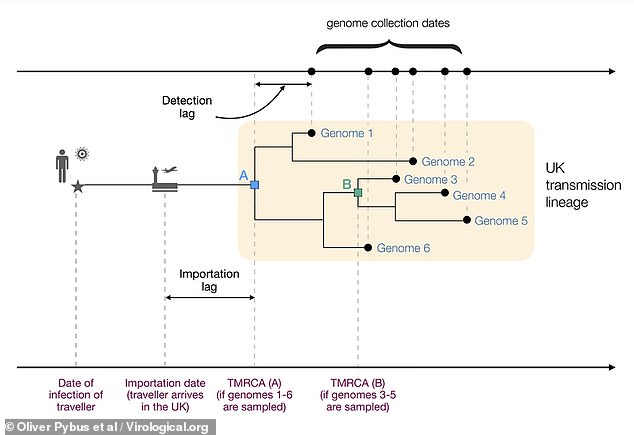 While some strains of the virus inevitably appear for the first time in the UK, scientists can work out where they stemmed from by looking for the last common ancestor among samples collected by other scientists in the UK and around the world

China banned all international travel when the epidemic took hold there, while Italy blocked all flights from China at the time – although that did not succeed in protecting the country.

Britain did not force flights to stop but told people not to travel abroad. Airlines took it upon themselves to stop most flights when passenger numbers dried up.

It has since emerged that the reason officials refused to stop international flights into and out of the UK was that millions of people in Britain already had the virus.

Documents that were presented to the Scientific Advisory Group for Emergencies (SAGE) in March showed stopping flights would not have protected the UK.

In a paper dated March 22, the day before Britain’s lockdown, scientists said stopping international flights in a bid to stop people bringing the coronavirus to the UK from abroad was ‘not a useful measure’.

There were so many people already infected in Britain that any imported cases would be drops in the ocean, the paper explained.

It said: ‘The initial view from SPI-M [the Scientific Pandemic Influenza Group on Modelling, which advises SAGE] is that given the current widescale transmission of Covid-19 within the UK, measures to stop imported cases would have negligible impact. This might change if the UK were to successfully contain the epidemic.’

STOPPING INTERNATIONAL FLIGHTS CONSIDERED ‘NOT A USEFUL MEASURE’ IN MARCH

In a paper dated March 22, the day before lockdown, scientists said stopping international flights in a bid to stop people bringing the coronavirus to the UK from abroad was ‘not a useful measure’.

There were so many people already infected in Britain that any imported cases would be drops in the ocean, the paper explained.

It said: ‘The initial view from SPI-M [the Scientific Pandemic Influenza Group on Modelling, which reports to SAGE] is that given the current widescale transmission of COVID-19 within the UK, measures to stop imported cases would have negligible impact. This might change if the UK were to successfully contain the epidemic.’

On the subject of ‘hotspots’ the SPI-M committee suggested that flights from Spain and Iran were probably the highest risk.

Spain because of the sheer number of passengers – there were some 15,000 per day still arriving on weekday flights that week.

And Iran because of the severity of the outbreak there – even though passenger numbers were low, there was a high chance some of them might have the illness.

It said flights from countries like France, Italy and Germany were low-risk because they were going through the same experience as the UK and passenger numbers were already low because of their government and airline restrictions.

Britain did not force flights to stop but told people not to travel abroad. Airlines took it upon themselves to stop most flights when passenger numbers dried up.

Data in the Edinburgh and Oxford study showed another 15 per cent of samples could be traced back to Belgium (6.47 per cent), the Netherlands (4.48 per cent) and Ireland (3.1 per cent).

Some 2.07 per cent of cases originated in the US — which is still being ravaged by the disease — and 2.95 per cent came from Switzerland.

None of the other countries where the SARS-CoV-2 lineages could be pinpointed to were named in the study, yet to be peer-reviewed by fellow scientists.

Some of the virus strains will have appeared for the first time in the UK as descendants of viruses which were carried into the country from other countries.

Even though they will have technically formed in Britain, they can still be traced back to their most recent ancestor, which will have inevitably come from another country.

Because the pandemic is believed to have started in China, all the virus lineages will ultimately be able to be traced back to there, and then newer versions of it can be tracked across the world as long as scientists keep recording the types they find.

But the research, carried out on behalf of the COG-UK consortium, did not offer any clarity as to when the disease was first introduced to the UK.

Scientists now admit that the virus could have been spreading in the UK as early as December, two months before Britain’s first cases were officially diagnosed.

But leaked Government data, seen by the South China Morning Post, suggests the first case was observed almost a month earlier, on November 17.

The first cases on British soil were only identified on January 31, when two Chinese nationals in York tested positive for Covid-19.

But, with knowledge of the disease’s distinctive symptoms, scores of Britons now suspect themselves or loved ones were infected well before then.

And Dr Stephen Baker, from Cambridge University’s Infectious Diseases Institute, told the Guardian: ‘People are on heightened awareness about any sort of respiratory infection and it is easy to retrofit stories to things.

‘Colds, influenza and even pneumonia are, after all, common in the winter months.

‘Let’s say it was kicking off fairly substantially in Wuhan and people weren’t being informed: could there have been people travelling to and from China at that point who may have been infected by coronavirus?

‘That is completely possible. Is it then possible that they transmitted the virus to other people when they were in the UK? Yes, of course that’s possible.’

His comments came after the COVID Symptom tracker, designed by scientists at King’s College London suggested the disease arrived in the UK in January.

The app asks its 2.6million users to report their symptoms daily, even if they are well, in order to map the disease’s spread.

Tim Spector, professor genetic epidemiology and one of the brains behind the app, said hundreds of contributors have admitted to suffering from Covid-like symptoms at around New Year.

Although the cases are untested, the reports suggest the virus gained a foothold in the UK long before the first case was identified on British soil on January 31.

Professor Pybus’s research showed the first observed importation of SARS-CoV-2 occurred at the beginning of February and came from Italy — the country at the heart of Europe’s crisis at the time.

But the first two cases, which had to have come from abroad because the virus did not originate in Britain, were not confirmed until January 31.

Fears of an outbreak were sparked after the male University of York student and his mother – both Chinese nationals – were struck down with the disease.

COG-UK, which carried out the study, is the Covid-19 UK Genomics Consortium.

It is a collaboration of NHS bodies, Public Health England and its counterparts in Scotland, Wales and Northern Ireland, and universities and research labs across the UK which are investigating the coronavirus. It is funded by the Department of Health.

The study was published without review from other scientists on the website Virological.org.